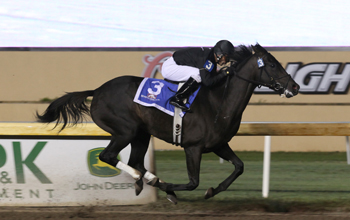 A new class was honored with induction to the Oklahoma Horse Racing Hall of Fame at Remington Park on Friday night. Presentations were held after seven of the evening’s races for the new members.

Jockey Luis Quinonez started his career in 1989. He won the first race he ever rode at Remington Park and is only the second jockey to win more than 1,000 races locally. Quinonez, who won the Grade 3 Oklahoma Derby on Wally’s Choice in 2004, is approaching 3,700 total career victories.

Trainer Joe Offolter, present at Remington Park since the day the track opened in 1988, was honored for his accomplishments. The Dibble, Okla. resident is just the third conditioner to train over 500 winners at Remington Park.

Breeder-Owner-Trainer C.R. Trout of Edmond, Okla. was honored for a breeding and racing operation that deals almost solely in stakes competitors, usually winning those races more often than not. Trout trains Shotgun Kowboy, who won the Grade 3 Oklahoma Derby in 2015. The 5-year-old Oklahoma-bred gelding will attempt to become a millionaire on Sunday in the $75,000 Jeffrey Hawk Memorial Stakes. Shotgun Kowboy needs to win or finish second to reach the milestone.

Caleb’s Posse, winner of the Grade 1 Breeders’ Cup Dirt Mile at Churchill Downs in 2011 was honored as the latest horse to win at Remington Park and go on to multiple Grade 1 success on the national stage. Owned by the late Don McNeill of Edmond, Okla. and Cheyenne Stables of Everett Dobson, also of Edmond, Okla., Caleb’s Posse won the Clever Trevor Stakes at Remington Park in 2010 as a 2-year-old. He was trained by Donnie Von Hemel.

She’s All In, only the second female Oklahoma-bred to become a millionaire, was honored. A winner of the Oklahoma Classics Distaff in four consecutive years, She’s All In was bred and owned by Robert Zoellner of Tulsa, Okla. She was trained by Roger Engel at the beginning of her career and by Von Hemel for the majority of her career. She’s All In retired after winning her final Classics Distaff at Remington Park in 2013.

Okie Ride, a four-time winner of the Oklahoma Classics Sprint, also went into the hall of fame for owners Kris & John Richter of Perkins, Okla. and trainer Kenny Nolen. Okie Ride was one win away from tying the all-time Remington Park mark for career wins when he unexpectedly passed away in August.

Broadcaster Chris Lincoln was honored with inclusion to the hall of fame. A longtime resident of Tulsa, Lincoln helped found the sports production company Winnercomm and originated horse racing programming for ESPN and other networks for over 20 years. Lincoln still works in the Tulsa market after retiring as executive sports director at KTUL-TV in Tulsa in 2011.