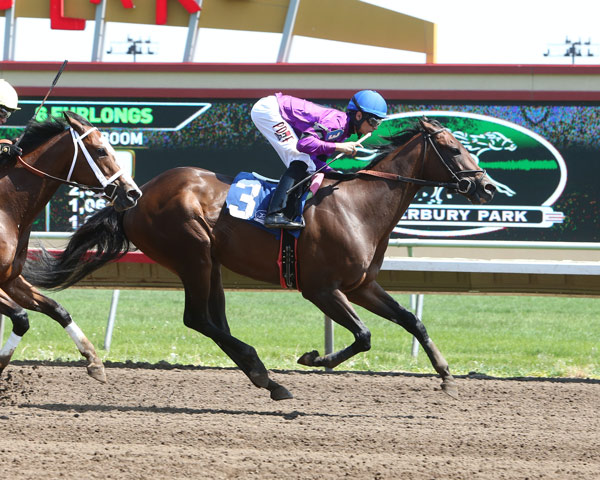 Owners Scott and Angie Rake completed a weekend sweep of Minnesota-bred stakes races when their homebred Sky and Sea won the $60,000 Lady Slipper Stakes Saturday at Canterbury Park, one day after their Bourbon County won the 10,000 Lakes Stakes. Both horses are trained by Bernell Rhone and were ridden by Shakopee, Minn. native Alex Canchari.

Canchari and Sky and Sea dueled with Rockin the Bleu’s and jockey Geovanni Franco until separating in deep stretch of the six furlong sprint, winning by 3/4 of a length in a final time of 1:10.79.

“I knew the horse to beat was Geovanni’s. I never really had to ask for run though. I knew she had enough to go on,” Canchari said of victorious Sky and Sea. Rockin the Bleu’s held second and Thunder and Honey was third.

The 5-year-old mare Sky and Sea, winless since her 2014 campaign when she was named Canterbury horse of the meet, has now won six of 15 starts and $223,260 in purse money. She paid $3.20 to win as the wagering favorite. Sky and Sea is a daughter of Oklahoma stallion Latent Heat, who stands at River Oaks Farms.

Canterbury Park’s Saturday handle was $719,158, an increase of 20 percent compared to last year.