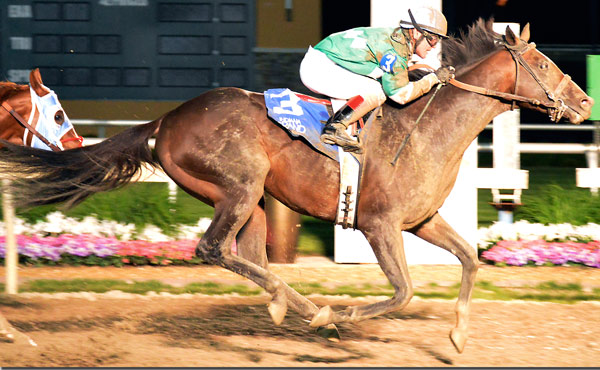 It came down to the final strides of the $47,000 allowance event at Indiana Grand Racing & Casino in race seven on Saturday. Mister Pollard and Jon Court rallied hard in the stretch to get the third and final lead of the race for the win, which pushed Indiana-bred Mister Pollard over the $500,000 career earnings mark.

Starting from post three in the power packed field of six, Mister Pollard did not use early speed from the gate. Bucchero and Marcelino Pedroza rushed out for the lead from the outside and were met with opposition by Grandpa Grumpy and Rodney Prescott along the inside. The two battled into the turn of the six furlong race before Bucchero cleared to the lead.

In the stretch, Bucchero drew away from the field, leaving Mister Pollard with a lot of ground to make up. However, the five-year-old son of Pollard’s Vision was up for the task. Court brought Mister Pollard to the outside and got his horse into another gear, rallying up for the win by one and one-quarter lengths over Bucchero. Sucess is Racing and Richard Bracho moved up for third. The time of the race was 1:08.76, the fastest of the meet thus far.

“When they hung up :21 (seconds) and change (for the first quarter), I felt a little better,” said Lauer on his chances for a win with Mister Pollard. “I didn’t know if he could win but I thought he’d be right there. He is just a neat little horse. He’s a stud but he is quiet. He stays here most of the time but we do turn him out occasionally so he can relax and graze a little.”

Mister Pollard paid $7.60, $3.80, $2.80 across the board. The win marked his eighth career trip to the winner’s circle for Mike Lauer, who bred and raised the stakes winner at his farm in Kentucky. The Indiana-bred is owned by Jim and Scott Farrar, Mike Johnson’s Falcon Racing Stable and Penny Lauer. Mister Pollard now has more than $524,000 in career earnings with all but a little more than $50,000 recorded in races at Indiana Grand. His sire, Pollard’s Vision, now stands at Mighty Acres in Oklahoma.

“I’ve had horses with Jim and Scott Farrar, who are from Texas, for about 15 years, but this is the first horse I’ve had with Falcon Racing Stable,” said Lauer. “They have owned pieces of other horses with other trainers and they came out to our farm and had their pick of five or six and they picked him (Mister Pollard). They are a great bunch of guys from the Louisville area and this horse has been the thrill of their life. They bought him as a 2-year-old so they have been with him the whole time.”

The win with Mister Pollard was the second on the program for the jockey-trainer combination of Court and Lauer. They also were winners in the fourth race with longshot Dance Line, who paid $92.20 to win. Court and Lauer also had a third place finish with Lady Temple in the eighth race on the card. Lady Temple, an Indiana bred 3-year-old filly by Temple City, is owned and bred by Jim Edgar, former Governor of Illinois.

Lauer, who is Indiana Grand’s all-time leading trainer for stakes wins, is known for his success with younger horses. He and his wife, Penny, have several brood mares at their farm, including Sweet Summer, the dam of Mister Pollard.

“His (Mister Pollard) mother is due to foal any day now,” said Lauer. “She’s in foal to Even the Score. She will foal in Indiana so the foal will be Indiana bred.”