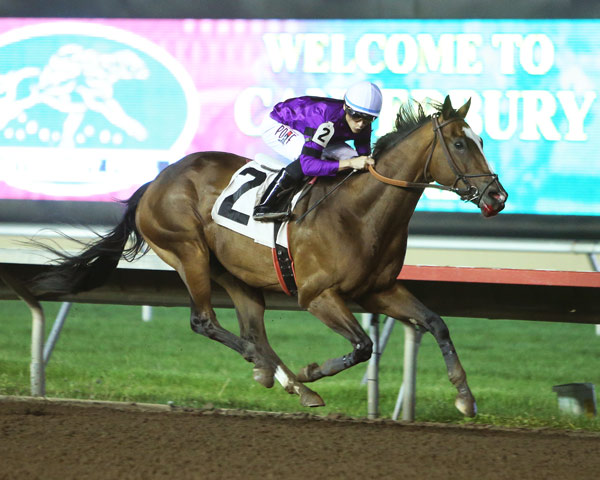 Bourbon County, owned by Scott Rake of Elko, Minn., won the $60,000 10,000 Lakes Stakes Friday at Canterbury Park, successfully defending his title on opening night of the Minnesota track. The wagering favorite, ridden by Alex Canchari and trained by Bernell Rhone, battled on the inside with Hold for More and A P Is Loose before taking the lead into the turn and pulling away to win by 1 3/4 lengths in a final time of 1:10.32.

Hold for More and jockey Dean Butler, who had three wins on the eight-race card, finished second, two lengths in front of third-place finisher Evert and rider Geovanni Franco.

Bourbon County is a Minnesota-bred son of Dehere who has won now eight of 15 starts with earnings of $264,932.

Canterbury officials announced in April that they were reducing takeout, the amount withdrawn from wagers before winners are paid, to the lowest in the country. This reduction was met with widespread approval of horseplayers nationwide and resulted in handle of $840,999, an increase of 33 percent over 2015 opening night.

“This is a great night for Minnesota racing and a great group of Minnesota-breds,” Rake said.
“Congratulations to all the owners and trainers. The real winners are the bettors with this low takeout. They’re leaving with more money in their pockets.”