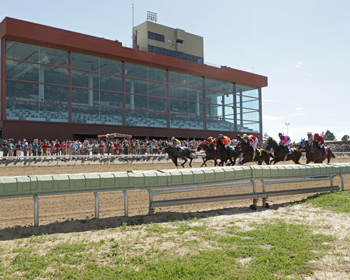 Arapahoe Park will begin its 25th consecutive season of live horse racing in Colorado on Friday, May 20. The track that opened for one season in 1984 and has raced every year since 1992 will feature 39 days of Thoroughbred, American Quarter Horse, and Arabian racing in 2016 from May 20 to August 14. Racing will take place on Fridays, Saturdays, and Sundays, as well as holiday Mondays for Memorial Day and the Fourth of July. The first race each day will be at 1 p.m.

For Thoroughbreds, the marquee race of the season will be the $100,000 Gold Rush Futurity for 2-year-olds over six furlongs on August 14. Colorado has been a springboard for 2-year-olds to begin successful racing careers. Chips All In, the 2011 Gold Rush winner, became the first horse that has ever raced in Colorado to compete in the Breeders’ Cup when he ran in the Turf Sprint in 2013. Get Happy Mister, the 2012 Gold Rush winner, went on to represent Colorado on the big stage in California to become the highest-earning Colorado-bred ever with a win in Santa Anita’s Grade 3 San Simeon Stakes in 2015.

For Quarter Horses, 2015 featured some of the richest races, best quality horses, and closest finishes that Colorado has ever seen. Friday’s opening day program includes five trials to the Cherry Creek Futurity and four trials to the Lucille Rowe Derby for Colorado-breds. Three Olives N Smoke, perfect in five races at Arapahoe Park as a 2-year-old in 2015, including the Cherry Creek and Rocky Mountain futurities, is entered in the Lucille Rowe trials.

For Arabians, the three nominees for Arabian Horse of the Year at this year’s Darley Awards—Dc Willeys Song, Paddys Day, and So Big Is Better—were all winners during the 2015 season at Arapahoe Park. Paddys Day won horse of the year honors and will attempt to repeat his wins in the COBRA Sprint and Classic in 2016.

Arapahoe Park’s races and stories will be broadcast on a weekly feature television show, “Gates Open at Arapahoe Park” hosted by announcer Jonathan Horowitz on Altitude Sports & Entertainment (airtimes at http://www.altitude.tv).  During the 2016 season, Arapahoe Park will support three equine-related charities—CANTER Colorado caring for retired racehorses, the Colorado Horse Council serving as the equine voice for the Rocky Mountain State, and Nighthawk Ranch offering equine camp experiences for children recovering from cancer—with $1 for every starter going to each charity.

Arapahoe Park’s opening weekend of racing in 2016 will coincide with the Preakness Stakes, the second jewel of the Triple Crown, from Pimlico Race Course in Baltimore on Saturday, May 21.