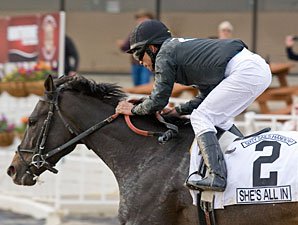 The 21st-running of the Oklahoma Classics, a night of divisional stakes races for top Oklahoma-bred Thoroughbreds, has been compiled for Friday evening at Remington Park. Overall, the 10-race program is worth $1,120,000 in total purse money and will begin at 7pm.

Millionaire She’s All In is the heavy 2-5 morning-line favorite in the $145,000 Distaff as she attempts to win the race for a fourth consecutive year. Owned by Robert Zoellner of Tulsa, Okla. and trained by Donnie Von Hemel, She’s All In will use the Distaff as her swan-song, making her final career start.

“This will be her retirement race and bon voyage party,” noted Zoellner who also bred She’s All In. “She’s been entered in the Fasig-Tipton Sale in Lexington, Ky. in November. There’s been a lot of interest in her and this is a tough decision. At times in horse racing all of the financial prospects have to be considered and we are treating this as a hard business decision.”

The only winner in the Distaff since 2010, She’s All In has posted 15 career victories with 10 of them at Remington Park. She has earned $442,444 through 13 lifetime starts in Oklahoma City. While winning only once this year, in an allowance that served as a prep race for the Distaff in late September, She’s All In has finished in the money in four of her eight attempts in 2013.

“She’s been a very consistent runner throughout her career and has been outstanding at Remington Park,” Von Hemel said. “She’s performed well wherever we’ve taken her. She has the talent to go to some of the top races around the country and when there has been an opportunity for her, she’s come through in those races on a number of occasions.”

“Donnie has told me many times that She’s All In is one of the soundest horses he’s ever trained,” Zoellner said. “She’s helped put us on the map and helped the Oklahoma-bred program as well. To have a horse as special as her is what every owner hopes to have. She’s the kind of horse you dream about getting and to be able to enjoy her success with my family and friends has provided so many memories.”

A 6-year-old mare by Include from the Hickory Ridge mare Georgia OK, She’s All In has won 15 of 37 career starts with eight more second-place runs and a trio of thirds. Zoellner admits to the emotional swings he knows will take place after the Distaff on Friday night.

“It’s very bittersweet. I’m excited to see this race and for She’s All In to move on to her next career. I’m happy to see her go on in life but at the same time, sad to see it happen. However, we’ve placed a decent reserve amount on her for the upcoming sale. If that isn’t met, then we’ll bring her home and keep her as a broodmare at our ranch.”

She’s All In will face six others in the Distaff, four of which she defeated in the September allowance start at Remington Park. Jockey Luis Quinonez will have his normal place atop She’s All In for the Distaff, the sixth race on Friday night with a scheduled post time of 9:20pm.

The $175,000 Classics Cup is the richest event on the Classics program Friday night. A field of eight, with seven wagering interests, drew into the race with defending champion Fifth Date involved. However, he doesn’t pull morning-line favoritism due to the more recent success of another.

“Imahit is the slight morning line favorite after winning the allowance prep for this race by nearly two lengths,” noted Remington Park odds-maker Jerry Shottenkirk. “He has won three of seven over the local track and will be on or very close to the lead throughout the 1-1/16th miles event.”

Owned, trained and bred in Oklahoma by C.R. Trout of Edmond, Okla., Imahit won an allowance race, serving as a prep for the Cup in late September, defeating three of the rivals he’ll face again on Friday night. Jockey Ken Tohill will ride Imahit, installed as the 3-1 morning-line favorite. The 4-year-old gelding attempts to better his second-place finish in the Cup a year ago.

Fifth Date, winner of the 2012 Cup, has returned to sprinting most recently this year, winning just one of nine attempts to this point in 2013. Victorious in 11 of 40 career attempts at Remington Park, Fifth Date has won 18 races from 71 lifetime starts with overall earnings of $498,225. Owned by Danny Caldwell of Poteau, Okla. and trained by Federico Villafranco, Fifth Date will be ridden by Alex Birzer in the Cup. He was aboard the now 9-year-old when he won the 2012 edition as a 20-1 longshot.

Fifth Date is coupled in the Cup wagering with Ted’s Folly. The 2011 Remington Park Horse of the Meeting as a 2-year-old when he won six consecutive races, Ted’s Folly won the Springboard Mile, Remington Park’s top stakes event for 2-year-olds.

The Classics Cup will be the ninth race of 10 on Friday night with a scheduled post time of 10:44pm.

The final four races on Friday will comprise the Oklahoma Classics Primetime Pick 4, featuring a guaranteed minimum wagering pool of $25,000. The Pick 4 races include races 7 thru 10: the Classics Lassie (race 7); the Classics Juvenile (race 8); the Classics Cup (race 9) and the Classics Turf (race 10).