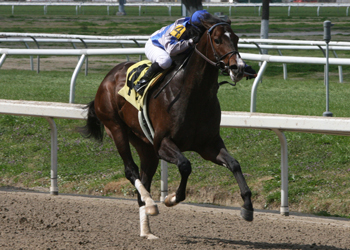 Claiborne Farm and Adele Dilschneider’s Bind, a 5-year-old son of top sire Pulpit, will enter stud in 2014 at Jay Adcock’s Red River Farms in Coushatta, Louisiana. He will stand for $1,500 as property of Claiborne, Dilschneider and Nathan Granger.

A winner at three, four, and five, Bind finished on the board in seven of his eight career starts. Trained by Al Stall Jr., Bind initially captured the attention of horsemen when he earned a 105 Beyer Speed Figure winning his racing debut. That 9 1/2-length win at Fair Grounds with a six-furlong clocking of 1:08.80 also earned him the distinction of “TDN Rising Star” for his performance. In addition to his three six-furlong wins at Fair Grounds, Bind placed in the Sam Houston Sprint Cup S. and finished fourth in the Commonwealth S.-G3. He retired with lifetime earnings of $108,335, three wins, two seconds and a third.

“Bind ran one of the best ‘Rag’ numbers (1 1/2) I’ve ever seen for a first-time starter,” said trainer Stall. “We felt the sky was the limit with him, and he also is one of the most physically attractive horses I have ever trained.”

Bind is by leading sire and sire of sires Pulpit, whose record at stud boasts 70 SWs (42 Graded), including SWs and top sires Stroll, Tapit, and Sky Mesa. Bred by Claiborne, he is out of the Unbridled mare Check and is bred on the same cross as Tapit. Bind is the full brother to the promising 2-year-old Quilt, who was second by a head in a maiden special weight at Saratoga this summer, and he is also a half-brother to Hakama, who placed in the Illinois Derby-G3.