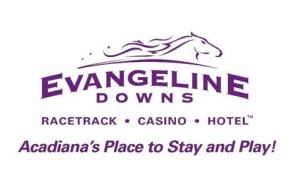 Forest Lake ($66.00) and Waha Wild ($17.80) recorded upsets in the EVD Star and EVD Starlet Stakes for 2-year-olds at Evangeline Downs Racetrack Casino & Hotel on Saturday evening, the closing night of the 2014 Spring/Summer Thoroughbred season. Each event was contested at the distance of six furlongs on the main track that was labeled sloppy after persistent rainfall over the past 48 hours.

Owner by former NFL quarterback Jake Delhomme’s Set-Hut LLC, Louisiana-bred Forest Lake kicked clear from her nine rivals after dueling for the lead in the early stages, eventually hitting the finish line two lengths clear of runner-up Golden Barbara while covering the distance in a time of 1:12.54. Ridden by Hector Santiago and trained by Jake’s father, Jerry Delhomme, Forest Lake earned $45,000 for the win, the second in five career starts for the daughter of Forestry.

Lady Emily Sage was next across the finish line in third, followed by Theyplayingoursong and Miracles Yankee. Snarky Belle checked in sixth, with 1.10 to 1 favorite Joy of the Saints a disappointing seventh. Miss Frances, Our Bloomin Rose, and Gampys Poker Money rounded out the complete order of finish. Sawyer’s Wonder, Irish Salute, Private Promise, and Rebel Woman were scratched.

Oklahoma-bred Waha Wild, ridden by Coby Bourque, swept by the early leaders in the final 100 yards to score by three-quarters of a length over the 1.20 to 1 favorite Gotta Get Paid. The gelding by Offlee Wild covered the distance in 1:12.79 and recorded his initial lifetime victory. Trained by Harlan Boutte, the win was worth $45,000 for Waha Wild and country music star Toby Keith’s Dream Walkin Farms, which bred and owns the gelding.

Temple of Glass finished a close third, a length behind the winner, with Four Leaf Chief next in fourt. Quieta Tiz was fifth, followed by Nathan’s Kiss, Washboard Willie, and Purest Pleasure. Assorted Humour, Strong Currency, and Diamond Sideoats finished in the final three slots. Where Y’at Joe Joe was scratched.