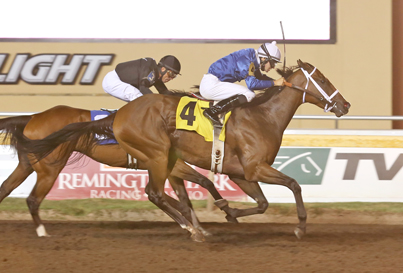 Ibaka continues his winning ways, returning to Remington Park Saturday night to face Oklahoma-bred 3-year-olds in a $44,625 allowance event. He came from just off the pace to just pass front-running Alpha And Omega in the final strides to win by a half-length.

Owned and bred by Doug Wall of Norman, Okla. and trained by Bret Calhoun, Ibaka was guided by Lindey Wade. The gelding has won all five of his starts in 2014, scoring at Delta Downs in Louisiana in January before winning three stakes in Texas, the Texas Stallion Stakes (Jim’s Orbit division) and Texas Heritage Stakes at Sam Houston Race Park and the Texas Stallion Stakes (Stymie division) at Lone Star Park.

Ibaka had to work over the final quarter-mile of the 6-1/2 furlongs, grinding down the half-length lead of Alpha And Omega in the stretch before just getting up before the line. Ibaka handled the measure in 1:16.43 over the fast track. Alpha And Omega was 1-1/2 lengths ahead of third-place finisher Fesstune.

The sixth career win from eight starts for Ibaka was his second at Remington Park. A son of Texas stallion Uncle Abbie from the With Approval mare Synersis, Ibaka made $25,659 for his Saturday victory to move his lifetime earnings to $187,695.