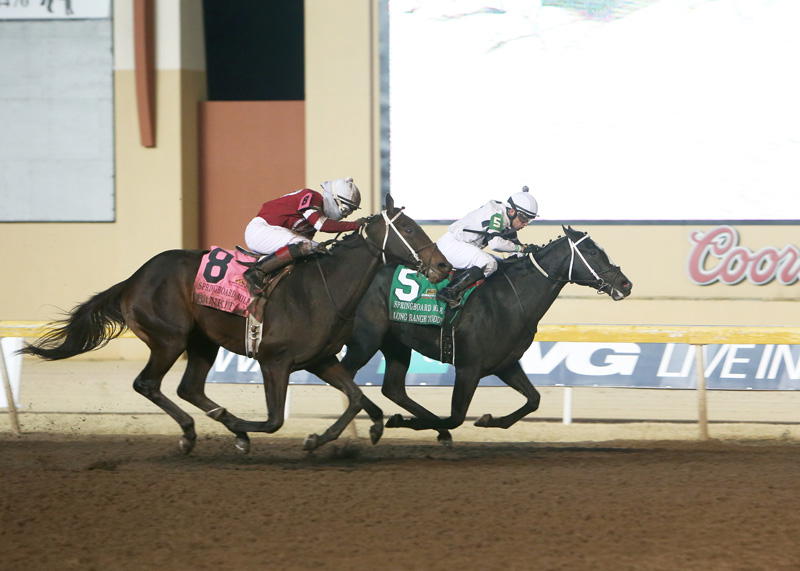 On a day when Remington Park dedicated a bronze statue of the first Oklahoma Derby winner Clever Trevor, this year’s Clever Trevor Stakes winner, Long Range Toddy, paid tribute as well. He came home an upset winner of the $400,000 Springboard Mile for 2-year-olds at 18-1 odds.

The amazing thing is he paid $39.20 to win, out of top trainer and National Hall of Famer Steve Asmussen’s barn. The lofty payoff happened even after already showing he loved this track in winning the prep race for the season’s top 2-year-old race. The $100,000 Clever Trevor Stakes was run on Nov. 2 at seven furlongs and as the final local tune-up for the Springboard Mile.

A 2-year-old colt by Take Charge Indy, out of the Unbridled Song’s mare Pleasant Song, Long Range Toddy earned 10 points toward his opportunity at running in the 2019 Kentucky Derby. The top 20 point earners from top races around the country get first preference to the “Run for the Roses” on Saturday, May 4, 2019. Asmussen’s horses swallowed up 15 of the 17 Kentucky Derby points available in the Springboard, the last race of the year in which Kentucky Derby points are involved.

Fives were wild for Asmussen on closing night of this 67-day meet as he won five races, tying his mark for most wins in a single day at Remington Park. He won the Springboard Mile for the fifth time and he also broke his own record of most wins in a meet with 105. He had won 102 times in 2009 for the previous mark.

“He’s a beautiful colt,” said Asmussen, “a home-bred of Mr. Horton’s. It was a nice win and I’m proud of him and Bankit, who ran second.”

Long Range Toddy earned $240,000 for owner Willis Horton Racing LLC of Marshall, Arkansas, quadrupling the colt’s lifetime earnings from $81,125 to $321,125. Jockey Richard Eramia, third in the final rider standings, was aboard for the upset win, covering the mile in 1:39.75 seconds over a fast track, and beating stablemate Bankit by a head. The time was well off the stakes record of 1:37.14 from last year’s winner – Greyvitos.

Willis Horton Racing is also a part owner the Springboard runner-up Bankit, sharing possession of that colt with Winchell Thoroughbreds of Las Vegas.

Another horse in Asmussen’s stable, Tone Broke, finished fourth with a wide trip. The only horse in the top four that wasn’t handled by the Asmussen team was third-place finisher Dunph, shipped in by trainer Michael Maker from Churchill Downs, who finished a little more than a length behind the winner.

Long Range Toddy was bred in Kentucky by Willis Horton Racing LLC. Since Eramia got aboard, this colt is undefeated in three starts, all at Remington Park. He broke his maiden at one mile on Sept. 28 in his first trip around two turns and then turned back for the win at seven furlongs in the Clever Trevor. Eramia had him shadowing the two early front-runners in the Springboard, sitting third for the first half of the race, following Dobbins G, the pacesetter, and Marquee Prince. When those two gave up the ghost, Long Range Toddy was there to pick up the pieces. Early fractions were :24.13 for the first quarter-mile, :48.76 for the half-mile, 1:14.01 after three-quarters of a mile and seven furlongs in 1:26.87.

Asmussen horses previously won the Springboard Mile in 2014 with Bayerd, 2005 with Test Boy, 2004 with Smooth Bid and 2002 with Shawklit Man.