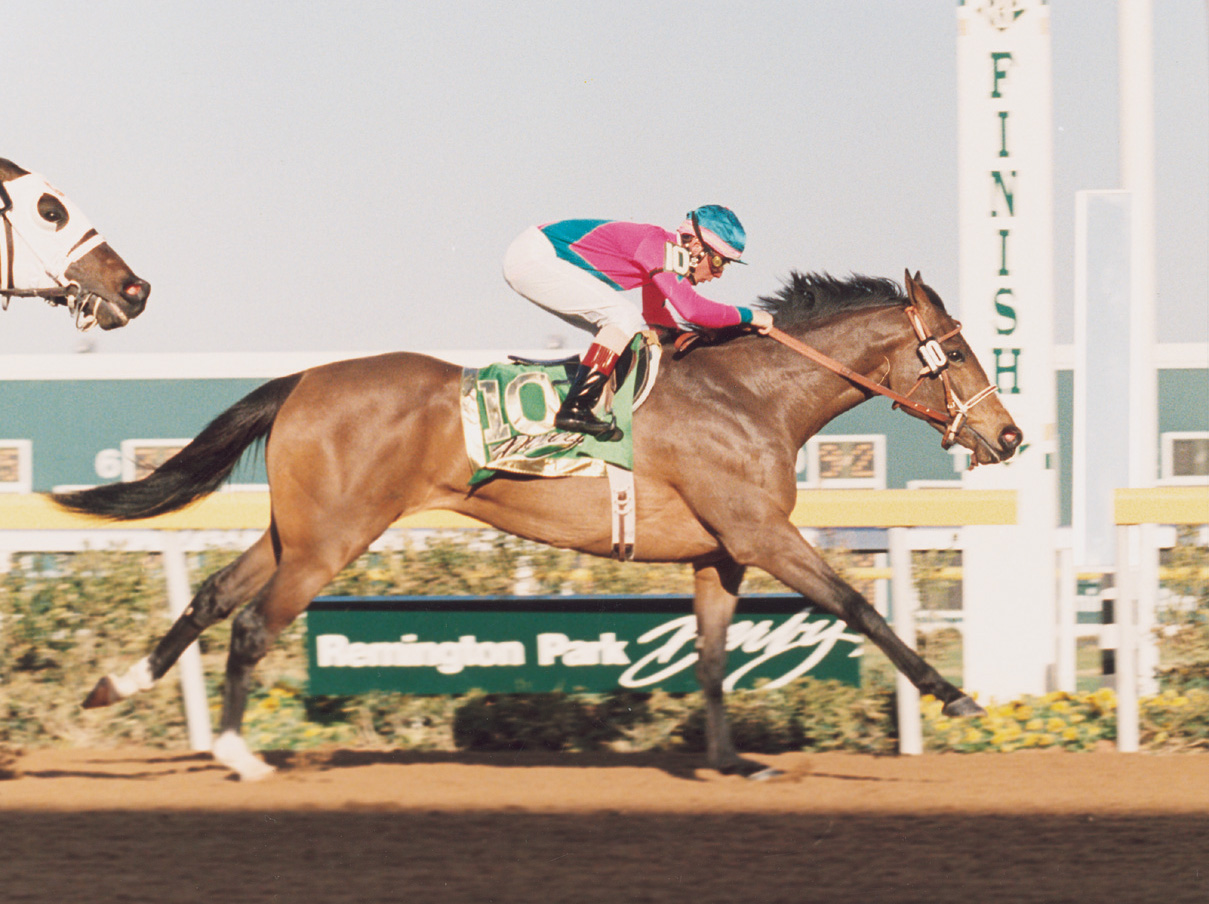 Remington Park will celebrate the final day of the 2018 Thoroughbred Season on Sunday, Dec. 16 with a stakes-laden racing program led by the $400,000 Springboard Mile. A special statue dedication is also scheduled as Clever Trevor, the great Oklahoma-bred who helped put Remington Park on the national racing map, will be honored with a bronze likeness in the saddling paddock.

Renowned equine artist Lisa Perry was commissioned to create the Clever Trevor statue. The image of Clever Trevor was modeled from his win in the inaugural Oklahoma Derby in 1989. Perry worked on the project for over 10 months before sending her work on to the foundry. The statue is scaled to three-quarters the actual size of the famous millionaire and will be placed in the center of the paddock walking ring.

Perry of Springtown, Texas, has created numerous statues of famed racing individuals. Among them, Alysheba, the 1987 Kentucky Derby winner and 1988 Horse of the Year, which stands at the entrance of Lone Star Park in Grand Prairie, Texas. Perry also created the life-size image of Hall of Fame American Quarter Horse Trainer Jack Brooks, which stands in the Remington Park paddock.

“We’re so proud of what Lisa’s created,” said Matt Vance, Remington Park vice president of operations, who spearheaded this project. “Clever Trevor really put Remington Park on the map in a big way. His accomplishments made us all very proud. He was such a special horse, becoming part of the Von Hemel Family for many years after his retirement. We are pleased that Clever Trevor can be memorialized in the Remington Park paddock and extend our gratitude to all the donors and Global Gaming Solutions for their generosity in finalizing this effort.”

Bred and owned by the late Don McNeill of Edmond, Okla., Clever Trevor won four of his six career races at Remington Park in 1988 and 1989 as a 2-year-old and 3-year-old with three of the four victories in stakes competition. A gelding by Slewacide from the Twice Bold mare Little Mary Beans, Clever Trevor won the first Oklahoma Derby (when it was known as the Remington Park Derby) in 1989. Trained by Donnie Von Hemel, Clever Trevor followed his signature win in Oklahoma City with a national campaign that resulted in much notoriety. All the while, his success established Remington Park, opened in the fall of 1988, as a prominent track in its initial years of operation.

After his derby win at Remington Park in March 1989, Clever Trevor had seven more races as a 3-year-old. A versatile sort, he could flash and maintain his speed or relax just off the pace-setters before making a stretch rally. The adaptable running style suited him well in a second-place finish to Dansil in the Arkansas Derby at Oaklawn Park in Hot Springs, Ark. He then finished well back of Sunday Silence and runner-up Easy Goer in the Kentucky Derby at Churchill Downs in Louisville, Ky., but rebounded for a strong summer run.

After winning the Grade 2 St. Paul Derby by seven lengths at then Canterbury Downs in Minnesota, Clever Trevor rolled to a nine-length victory in the Grade 1 Arlington Classic in Chicago. That race set him up for what was perhaps the greatest effort of his career.

Easy Goer, won the Belmont Stakes and denied Sunday Silence a Triple Crown in the process. After winning the Belmont, Easy Goer was expected to make short work of his rivals in the Grade 1, Travers Stakes at Saratoga but Clever Trevor had his own agenda.

Clever Trevor held the lead throughout most of the 1-1/4 miles Travers, taking his advantage into the middle of the homestretch. Easy Goer eventually wore down the top Oklahoma-bred, winning by three lengths over Clever Trevor who settled for second.

Clever Trevor raced until the fall of 1992. His final victory came in the Governor’s Handicap at Ellis Park in Henderson, Ky. He then finished second, beaten just a neck, to Irish Swap in the Washington Park Handicap at Arlington in September, in what turned out to be his final start. The gelding was retired in 1993 and lived the rest of his life at the Von Hemel farm in Piedmont, Okla., passing at the age of 30 in 2016.

Clever Trevor was just the second Oklahoma-bred to become a millionaire (1986 Horse of the Year Lady’s Secret was the first), finishing his career with $1,388,392 in earnings. A winner of 15 races from 30 attempts, Clever Trevor raced in 11 states and Ontario, Canada, winning races in six different states. He was ridden in all but two of his career attempts by Don Pettinger, with Hall of Famer Pat Day up for the other races. Pettinger rode Clever Trevor in all of his victories.

Don McNeill, Clever Trevor’s owner and breeder, passed away in 2015. Von Hemel is Remington Park’s all-time leading trainer with 1,035 career victories in Oklahoma City and has been the leading trainer in Oklahoma City 12 times. Jockey Don Pettinger retired from the saddle in 2010 with 3,388 career victories, 1,419 at Remington Park, and total mount earnings of nearly $46 million.

Clever Trevor, Don McNeill, Donnie Von Hemel and Don Pettinger are all members of the Oklahoma Horse Racing Hall of Fame at Remington Park. Remington Park has conducted the $100,000 Clever Trevor Stakes for 2-year-olds since 1997.

The Clever Trevor statue is scheduled to be unveiled during the middle of the racing program on Sunday.

Remington Park is in the final racing week of the 2018 Thoroughbred Season with racing on Friday and Saturday, Dec. 14 & 15 at 7pm with the finale of the season underway on Sunday, Dec. 16 at 3pm. All times are Central.

Read more about Clever Trevor in this 2012 article from American Racehorse.