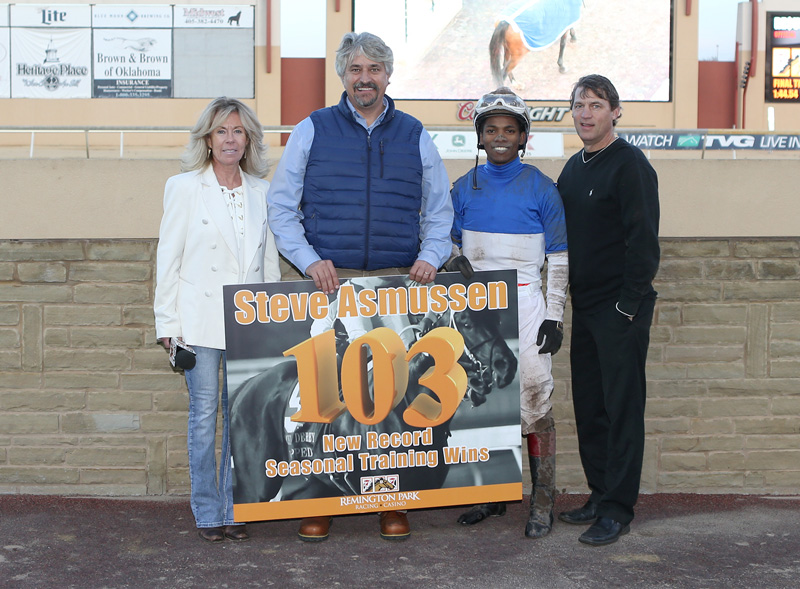 Cabrera unseated five-time reigning champ Ramon Vazquez and took one of his records in the meantime. The 26-year-old new top rider who lives in the Oklahoma City area was picking broccoli and peppers as a teenager on the family farm in Mexico only about a decade ago. Cabrera has quickly developed into a rider gaining respect in the Southwest Region of the country. He will return to Oaklawn Park in Hot Springs, Ark., for the winter/spring meet there after winning 95 races during the 2018 Remington Park Thoroughbred Season. He set a track record for mount earnings this meet with $2,377,944, breaking the old mark of $1,978,896, set by Vazquez last year.

Vazquez made a strong move to pass Richard Eramia late in this meet to finish second with 81 wins. Eramia was in third with 64.

“We came over here (to Remington Park) and I’ve had more opportunities than I’ve had the last couple of years,” said Cabrera. “A lot more trainers gave me the opportunity. I didn’t think it was going to go as good as it did. I’m very happy for it. We keep working hard every day. We want to stay up there and win as many as we can for sure.”

Cabrera’s big mount this meet was Welder, who became the first horse in Remington Park history to win four stakes races in the same season. The 5-year-old gray streak of lightning, owned by RaMax Farms in Claremore, Okla., and trained by Teri Luneack, won $42,000 to open his meet here, winning the Remington Park Turf Sprint on a sloppy main track; $99,000 in the David M. Vance Stakes, beating shippers from around the country; $78,000 in the Oklahoma Classics Sprint Stakes, and $42,000 in the Silver Goblin Stakes for a total of $261,000 earned for the season. Welder will likely next run at Oaklawn in the King Cotton Stakes, a $100,000 sprint for older horses, going six furlongs, on Saturday, Feb. 9.

Asmussen broke records for number of wins in one meet and purse money earned. He needed two wins on closing night to tie his own record of 102 wins in a Remington Park season, set in 2009. He managed that easily, making five visits to the winner’s circle Sunday, one with $400,000 Springboard winner Long Range Toddy, to set the new standard at 105. He also became the first trainer to pass the $3 million mark in earnings for one meet when he finished with $3,001,673. Long Range Toddy was the big horse in his barn with $321,125 in four starts here, most of that in the Springboard where he pocketed $240,000 for his owner, Willis Horton Racing of Marshall, Ark. Asmussen also scored $120,000 with She’s a Julie in the Grade 3, $200,000 Remington Park Oaks, and $105,000 with Hence in the $175,000 Governor’s Cup.

“I couldn’t do it without (assistant trainer) Darren (Fleming) and Pablo (Ocampo) and all the crew back there in this barn,” said Asmussen. “They do an incredible job here. That’s what we come here to do.”

Rounding out the top three in the trainers standings were Karl Broberg with 57 wins and Federico Villafranco with 40.

Caldwell became the only owner to reach the 300-win mark at Remington Park with 36 trips to the winner’s circle this season. His total victories all time here is now at 318 and he won his 10th championship owner award. The biggest score for Caldwell came with last year’s champion sprinter here, Eurobond, who won $28,292 on Sept. 22. His horses had total earnings this meet of $613,669.

Finishing second and third behind Caldwell this meet were End Zone Athletics, Inc., with 30 victories and Asmussen with 24.