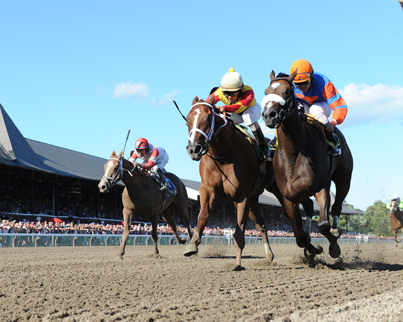 Valene Farms’ Louisiana-bred Designer Legs dueled gamely with leader Who’s in Town through the stretch and then was promoted to first place via disqualification Sunday to win the Grade 2, $200,000 Adirondack Stakes for 2-year-old fillies at Saratoga Race Course.

Who’s in Town, ridden by meet-leading jockey Joel Rosario, repelled the challenge of Designer Legs in the lane, but veered to her left at the sixteenth pole, impeding favorite Fiftyshadesofgold, who was rallying along the rail.

Who’s in Town crossed the finish line first, a neck in front of Designer Legs, but the racing stewards disqualified the daughter of Speightstown and placed her fourth behind Fiftyshadesofgold.

“Well, I thought I was sitting a good trip down the backside; turning for home, me and Rosario were kind of fighting it out,” Bridgmohan said. “He kind of bumped [Fiftyshadesofgold] a little bit and she hesitated just enough. His filly was game, but we got lucky and got put up.”

When the gate opened, Hop the Six broke on top, but Who’s in Town soon took over, running the first quarter-mile in 21.79 seconds. Fiftyshadesofgold moved up on the inside, but rider Corey Lanerie took his filly off the pace and saved ground.

After a half-mile in 44.57, Who’s in Town turned for home and Designer Legs engaged her on the outside. While those two sparred, a space opened on the inside and Lanerie attempted to go through with Fiftyshadesofgold.

Who’s in Town bumped Fiftyshadesofgold, who was forced to pull back, and then finished a neck in front of Designer Legs.

Thank You Marylou finished third and was promoted by the stewards to second, followed by Fiftyshadesofgold, who was put up to third place. Hop the Six was fifth.

Fiftyshadesofgold, a Texas-bred daughter of My Golden Song running for breeder Clarence Scharbauer Jr., suffered her first defeat after easily breaking her maiden at Texas-breds at Lone Star Park and then romping in the Debutante Stakes at Churchill Downs.

Designer Legs, a daughter of Graeme Hall, paid $35 for a $2 win wager. The filly was bred by Tommy Hewett out of the Suave Prospect mare Elegant Designer. Designer Legs sold for just $10,000 at last year’s Breeders’ Sale Company of Louisiana Yearling Sale. Prior to her Saratoga win, she broke her maiden at Canterbury Park in Minnesota and won the Prairie Gold Lassie Stakes at Prairie Meadows in Iowa. Her earnings now stand at$180,000 after three starts.