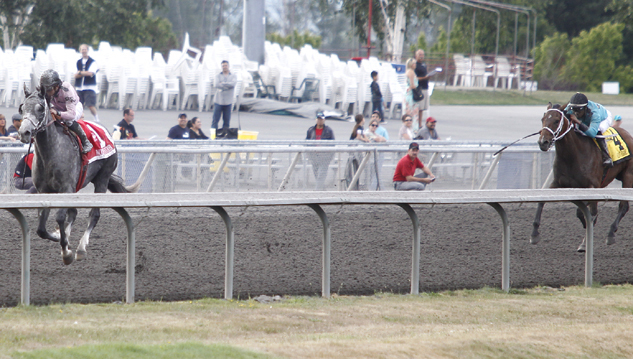 Texas-bred Worldventurer took advantage of a fast early pace and stormed from behind for a powerful seven-length victory Sunday in the $65,000 Emerald Downs Derby at Emerald Downs near Seattle.

With Julien Couton riding, Worldventurer ran 1 1/8 miles in 1:49.79 and paid $7.80, $4.60 and $3. Blaine Wright is the trainer for owner Peter Redekop of Langley, British Columbia. Redekop purchased Worldventurer for a sale-topping price of $150,000 at the Fasig-Tipton Texas 2-Year-Olds in Training and Horse of Racing Age Sale in March. The gelding was bred by Clarence Scharbauer Jr., who also stands Worldventurer’s sire Wimbledon at his Valor Farm near Pilot Point, Texas.

Worldventurer is the fourth different winner in the 3-year-old division at Emerald—joining Finallygotabentley, Mike Man’s Gold and Music of My Soul—but the Emerald Derby winner has won divisional honors the last eight seasons at Emerald Downs. Worldventurer competed in the final three races of the Emerald Downs series, compiling a win and two thirds, and winning the biggest of the four races might sway voters in his favor.

“The only thing that (Blaine Wright) told me before the race was that this horse didn’t like to be on the inside,” said rider Couton, a mainstay in Northern California who scored his first Emerald Downs victory. “Obviously they went pretty fast for the lead, so we were able to get out on the backside and get him into a good cruising speed. Hopefully, we can go farther.”

According to Wright, the plan is to ship Worldventurer to the $150,000 B.C. Derby at Hastings Racecourse on Sunday, September 8. Roscoe Pito in 2003 is the last horse to sweep the Emerald Derby and B.C. Derby.