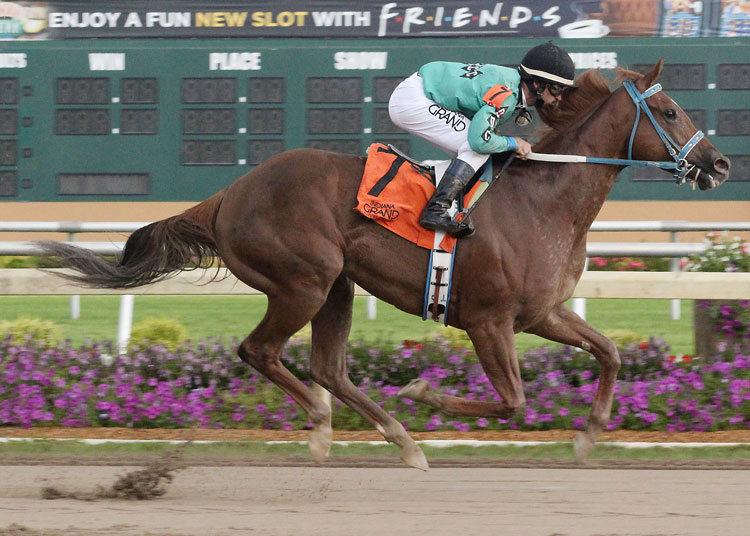 The 14th running of the $100,000-added Shelby County Stakes set up just as expected. The two early favorites, Carmalley Chrome (Rodney Prescott) and Easy Victory (Richard Bracho) broke quickly from the gate and sprinted to the lead. However, it was not anticipated that Joyous Lady and Tommy Pompell would have such a big kick at the end to pass them up in the stretch and drive off for the win.

Starting from post five in the field reduced to six starters, Joyous Lady was able to get behind the two front runners from the start of the six-furlong race. The top two rallied away from the field, leaving a big gap down the backstretch between them and the rest of the field. Halfway through the only turn of the race, Joyous Lady had caught up to the top two and her momentum was strong. The four-year-old daughter of Kela easily passed them up and had the lead by the top of the stretch.

Joyous Lady ended up as the favorite of the field. She moved out to a four and one-quarter length advantage as she crossed under the wire. Hay Little Bit and Albin Jimenez finished second followed by Short and Sassy and Santo Sanjur who rallied up for third.

“She (Joyous Lady) is a little older than the top two (Carmalley Chrome and Easy Victory, both three) so I thought she might end up being the top pick,” said Randy Klopp, trainer and co-owner of Joyous Lady. “Tommy and I talked before the race and we knew the other two would go out for the lead so we wanted to sit off the pace. The small rain shower we got just before the race played to her advantage too. Luck was on our side today.”

Joyous Lady earned her third win in five starts for 2016 and her first career stakes win. She paid $5.40, $3.00, $2.60 across the board. The Indiana sired filly increased her career bankroll to more than $260,000 with the win for owners Klopp and Dennis Claramunt, who also bred the filly with Cynthia Claramunt.

“We will keep running her here,” noted Klopp when prompted by Nancy Holthus, on-air paddock analyst at Indiana Grand for future plans for the filly. “We will stay in the up and coming Indiana stakes.”