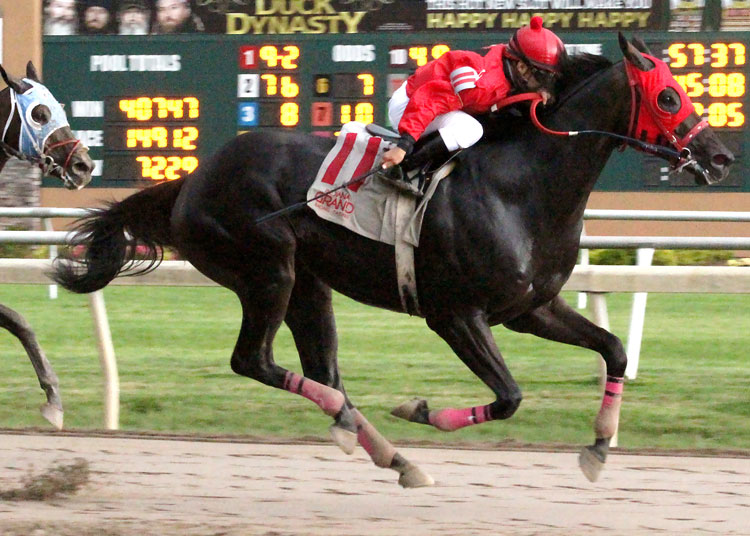 One of the oldest horses in the field proved to be the toughest in the 13th running of the $100,000-added William Henry Harrison Stakes Wednesday, Aug. 24 at Indiana Grand. Sucess is Racing, a former Indiana champ, returned to his previous stakes winning performance and captured the title in the six-furlong sprint under the guidance of Jockey Eddie Perez.

Starting from post 10 in the 10-horse field, Sucess Is Racing used early speed, but only enough to grab a front stalking position as Zoned In and Francisco Torres claimed the top spot from the inside followed closely by Easy Doer and Rodney Prescott along the outside. Sucess Is Racing sat patiently three wide as fractions of :22.05 and :45.08 were posted on the slightly wet track due to a small shower before the race. Zoned In maintained his positioning inside around the turn as Sucess Is Racing began to rally along the outside and challenge for the lead. The two were neck and neck at the top of the stretch before Sucess Is Racing got the best of his opponent and grabbed the lead solo for the stretch drive.

In the lane, Sucess Is Racing fought gamely to keep up the momentum as late closers began to charge in. Operation Stevie and Emmanuel Esquivel saved ground in the turn to have the most strength left for the challenge but in the end, no one could catch Sucess Is Racing, who won by one and one-quarter lengths over Operation Stevie. Still Chief and Marcelino Pedroza had a nice late rally on the outside to finish third.

“He (Sucess Is Racing) settled nicely from the beginning,” said Perez. “The plan was to make one big move heading for home. I was watching the horses in front of me. He doesn’t like to run up between horses so I kept him out and kept him clear of everybody.”

Sucess Is Racing is owned by Charles Watt and David Neiman’s Willowbrook Stables LTD. The six-year-old son of Major Success now has more than $440,000 in career earnings in winning his third career stakes race. He was also a winner of the William Henry Harrison Stakes in 2014 under jockey Ben Creed.

“This horse (Sucess Is Racing) has been doing well and he was ready and up for this race,” said Hammond. “Eddie (Perez) and I had a game plan to sit just off the pace and it worked out. And the rain we had before the race didn’t bother him. He likes the mud.”