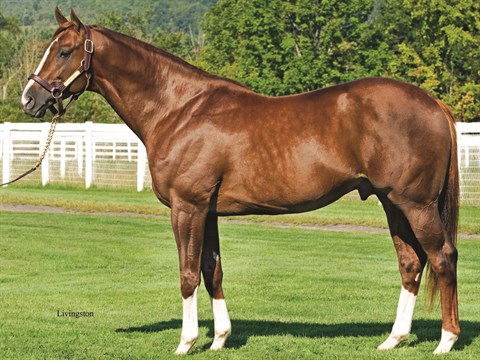 Valor Farm in North Texas picked up a new stallion this week, when Bob and Janice McNair’s Stonesider arrived from New York.

The winning son of Giant’s Causeway entered stud at Doc and Suzie O’Cain’s Highcliff Farm in 2008 and most recently stood in the Empire State at Keane Stud. He was relocated as part of a desire by the McNairs to consolidate their stallion interests.

“New York is wonderful if you have the mares and are breeding for that program,” said John Adger, a longtime bloodstock adviser to the McNairs. “They don’t have mares anymore, but their son, Cary, has a dozen mares in Texas. With Lane’s End Texas closing, they decided just to consolidate their stallions in one place, and Valor does a wonderful job.”

Ken Carson, general manager of Valor, said he is tickled to have Stonesider on the roster, because Valor has not had a Northern Dancer-line stallion since the farm stood Magic Cat, a son of Storm Cat. Magic Cat was sold and relocated to Minnesota in 2011.

What is promising about Stonesider for Valor’s breeding program in particular is the large number of Early Flyer daughters it owns. Valor has stood Early Flyer, a son of Gilded Time, since he retired to stud in 2004.

“Stonesider is out of a Gilded Time mare, which will produce some inbreeding to Teddy, who really concentrates well,” Carson said.

Injury curtailed Stonesider’s racing career, which included winning his first start in June 2005 at Belmont Park. He won as the favorite in a field that included future Grade 1 winner Flashy Bull and Grade 3 winner Tasteyville.

“He had a world of talent, but we just had back luck when he got hurt,” Adger said.

To date Stonesider has sired four black-type stakes winners, including multiple stakes winner Galiana, who earned $641,861; and Hey Kiddo, winner of the Roamin Rachel Stakes and earner of $361,768.