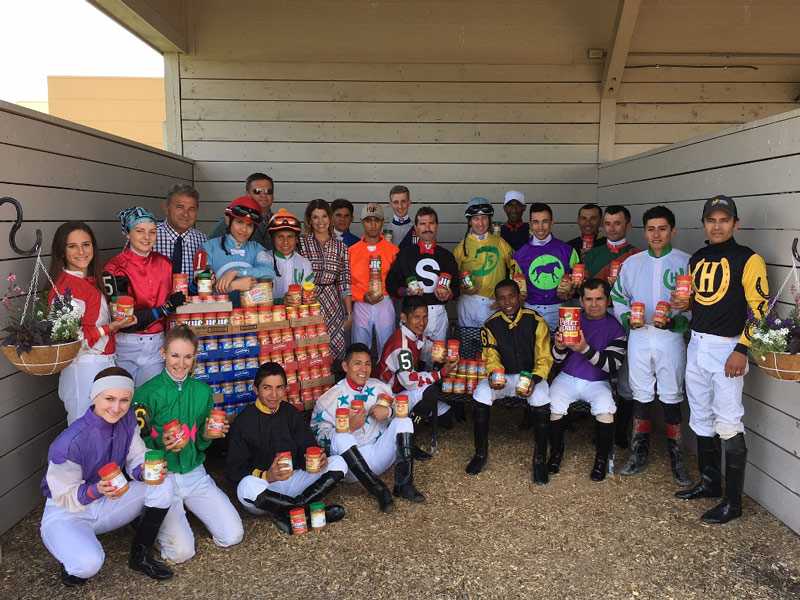 Peanut butter is one of the hottest commodities in the store available at Hoosier Veterans Assistance Foundation (HVAF). When their supply was getting low, members of the Community Outreach program at Indiana Grand Racing & Casino found out about the need and implemented a team member peanut butter drive during the month of May. The jockeys also found out about the need and wanted to assist. They held their own individual drive, collecting a total of 365 pounds of peanut butter for the cause.

“The veterans are out there defending everything for us, and we all should be grateful for their service,” said Jockey DeShawn Parker. “Without them, we wouldn’t get to do a lot of things we want to do, so this is a great cause to get behind.”

Parker, who is currently in contention for leading jockey in his first year of riding at Indiana Grand, is known for his charitable work. The veteran jockey, who has won more than 5,200 career races, personally donated 100 jars of the peanut butter collected.

HVAF has been assisting homeless veterans in the central Indiana area for more than 25 years. Located in downtown Indianapolis, the facility offers numerous services for veterans, including classes and counseling, clothing, and even preparing veterans for job interviews. The facility also offers an in-house grocery store free to all veterans. The peanut butter accumulated by Indiana Grand will provide many meals for veterans both living in the complex apartments at HVAF as well as those living on the streets.

For more information on HVAF, visit their Website at hvafofindiana.org.