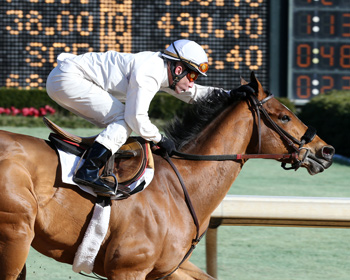 Multiple stakes winner Ivan Fallunovalot, the 2015 Texas Horse of the Year, is unlikely to run in the $400,000 Count Fleet Sprint Handicap (G3) on April 10 at Oaklawn because of lingering problems with a quarter-crack, trainer Tom Howard of Hot Springs indicated Saturday morning.

Howard said Ivan Fallunovalot hasn’t returned to the track since a half-mile workout in :48 Sunday morning at Oaklawn because his left front foot is “still a little tender” and time is running out to make the Count Fleet, a race the Valid Expectations gelding finished second in last year.

“It’s going to be close, very close,” Howard said. “We haven’t pulled the plug yet, but it’s very close.”

After winning the $100,000 King Cotton Stakes Jan. 30 at Oaklawn in his 2016 debut, Ivan Fallunovalot developed a quarter-crack on the inside of his left front foot in late February.

“We’ve changed up some things up and just giving it a few days to settle down,” Howard said. “But I’m running out of days.”

On behalf of Mathews, Howard claimed Ivan Fallunovalot for $25,000 at the 2014 Oaklawn meeting.