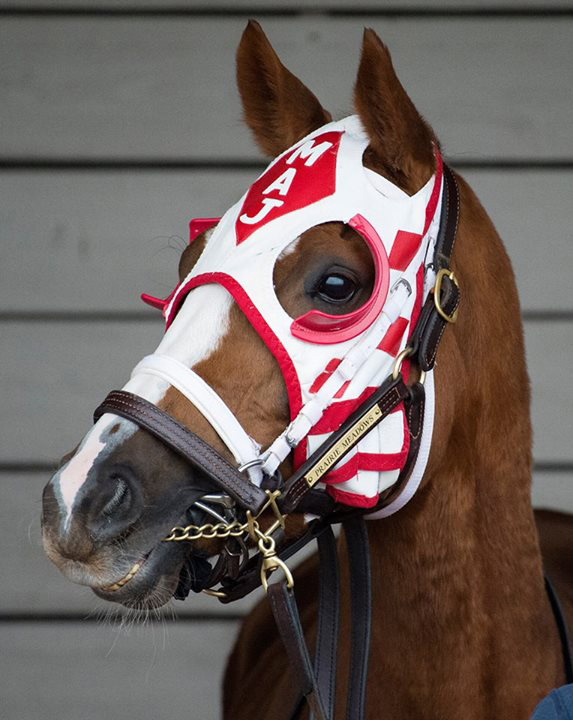 Nebraska native and former newspaper journalist Jeff Apel has a love of horses, and his passion brought him to Indiana Grand when he relocated to Central Indiana. He secured a job as an electronic games attendant in the casino and soon found his way to fellow Nebraska native Marvin Johnson’s barn. Today, he owns horses with the Nebraska Horse Racing Hall of Fame trainer and their partnership has produced several profitable purchases, including the race mare Lady Caroline.

Lady Caroline, who is now six-years old, was claimed as a three-year-old by Apel and the brothers’ team of Mike and Tony Jackson for $15,000 in 2014. She earned more than $36,000 for her new connections before showing signs of slowing down and giving Johnson the indication that she might be nearing the end of her racing career. Being one of Apel’s favorite horses, he negotiated a price of $2,300 and bought the Jacksons out to retain ownership of the mare as a game plan was thought out for the future of Lady Caroline.

“Marvin (Johnson) told me there was no guarantee Lady Caroline would ever run again,” said Apel, who worked as a sports writer for 15 years at the Grand Island Independent until 2005. “In fact, Marvin told me not to buy the mare. I told him I was willing to take a risk because she was the first horse I owned that made me a profit.”

Intuition paid off for Apel. After some time off in a field at Johnson’s farm in Grand Island, Neb., Lady Caroline came back to the track, earning Apel and Johnson almost $85,000. In all, she completed five trips to the winner’s circle at Indiana Grand, all under jockey Fernando De La Cruz. Her success made her a viable investment and she was claimed by new connections. After making one start, she was retired to broodmare duty in Kentucky.

Apel thought his connection to Lady Caroline was over. He still admires a collage of photos of his prized mare on his walls at his home. It wasn’t until he discovered a message through Facebook that brought him back to the race mare that had meant so much to him.

“I am not very adept at Facebook and was not connected on Facebook Messenger, so the message I found from Stacy Tuttle was over a year old,” said Apel. “She had researched online and found my connection to Lady Caroline and had sent me a message that forever changed my life.”

Both Tuttle and Apel have a special connection to Lady Caroline. The mare, which was purchased by Tuttle’s cousin, Dwight Preston, from the Fasig Tipton Sale as a yearling for $5,000, was named in honor of her daughter, Caroline. A year later, the three-year-old Caroline was killed in a crash outside of Carrollton, Ky. when her Head Start bus left the road and overturned. Caroline was one of two small children killed in the crash.

“I realized that she (Stacy Tuttle) probably didn’t have a photo of Lady Caroline so I was able to mail her an extra one that I had,” added Apel. “I believe little Caroline must have been watching over us when we kept Lady Caroline in 2015. It was truly an emotional moment for me when I read a message that was over a year old from a Kentucky mom who lost her three-year-old daughter in that bus crash.”

Racing will continue for Apel with the Johnson Stable at Indiana Grand. But he will be hard pressed to find such a strong connection to any of his current stock as he found with Lady Caroline. The chestnut mare represents more than just a racehorse for two separate families forever linked together.