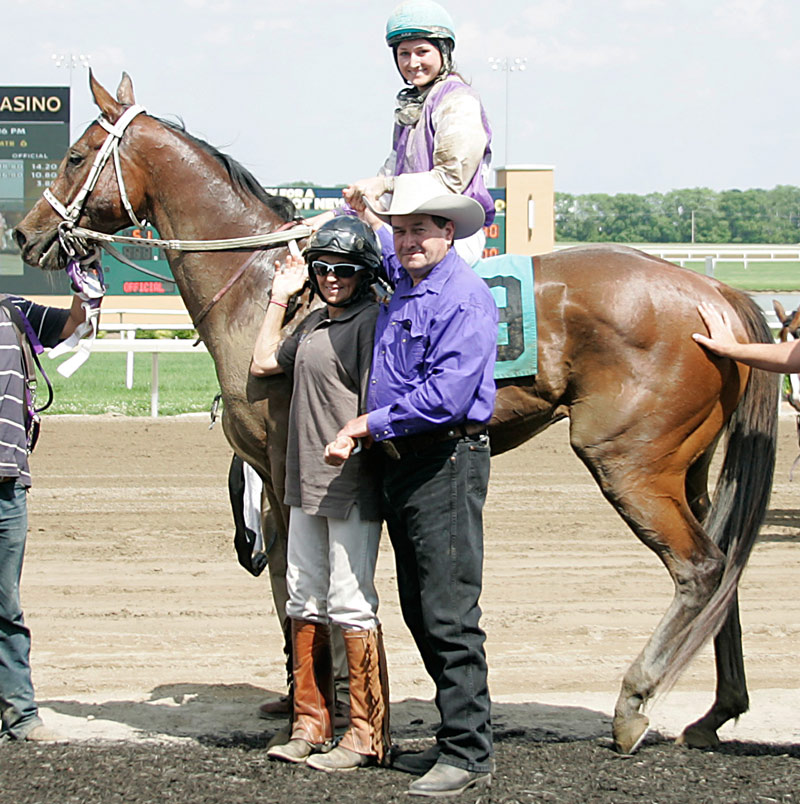 Hard work, dedication, and perseverance are all good traits of a jockey. They are also good traits for a college student and ones that Jockey Cheyanna Patrick applied to her degree in criminology with a minor in Spanish. The 20-year-old graduated from the University of South Florida (USF) in Tampa Saturday, May 6 and will enter law school this August at the University of Kentucky College of Law.

A native of Brooksville, Fla., Cheyanna spent much of her younger educational years in Pendleton, Ind. while her family raced at Hoosier Park and Indiana Grand from April through November. Always excelling at school work, she was able to begin college at the age of 16 and pressed through to gain her degree early, all while keeping a perfect 4.0 grade point average.

Cheyanna was one of 5,700 students that walked across the stage at USF to receive her bachelor’s degree. Her mother, Cindy, and her father, Gary, both in the historical statistics for owning and training Thoroughbreds, respectively at Indiana Grand, took a rare day off from work to be in attendance for such a momentous event for Cheyanna.

“It was great to have my family there,” said Cheyanna. “They are my biggest supporters. We also had some family friends there too. It was a special day.”

In addition to receiving her degree, Cheyanna also received the King O’Neal Scholar Award. Of the 5,700 in her graduating class, only 34 completed their degrees with a perfect 4.0, placing Cheyanna in an elite group for the honor.

“It was hard at times and I had a couple of classes this year that were challenging, but I was able to keep my 4.0 GPA,” said Cheyanna. “I’m excited to start law school August 22.”

As with every other aspect of her career thus far, choosing the University of Kentucky’s College of Law was also a goal for Patrick. The University offers specific classes in equine law as well as agricultural law journals, making it a perfect fit for Cheyanna’s dream of working in law someday that will apply to horses and racing. Plus, she will be surrounded by horses and racing while she completes her law degree.

“UK’s law school was my top pick because of the classes they offer,” said Cheyanna. “Plus, there are lots of good firms in that area, so I’m hoping I can continue my career in the Lexington area after graduation.”

One person that Cheyanna continues to lean on for support and guidance is Thoroughbred Owner Maggi Moss, who is an attorney in the Des Moines, Iowa. Moss wrote a letter of recommendation for Cheyanna to enter law school, which Cheyanna feels was a key component to her acceptance into UK.

“I’ve never met Maggi Moss, but we have talked a lot through email the past several years and her assistance and advice have been so helpful,” said Cheyanna. “I hope she will continue to mentor me through law school.”

Moss, who was Indiana Grand’s leading owner last season, made her first trip to Indiana for the Indiana Derby in 2016. However, Cheyanna was completing a six-week excursion through the country of Spain, which was associated with her minor in Spanish through USF.

Cheyanna was the recipient of the Juan Saez Leading Apprentice Jockey Award at Indiana Grand in 2015. Although being a jockey is not a year-round gig for her, she is back on track this year at Indiana Grand. She has ridden two winners in the first 13 days of racing and also hit another career high when she guided Bipartisan to victory for trainer Carl Deville at Churchill Downs Saturday, April 29. In a riding career that is only part-time, she has won 55 races since beginning her career as a jockey at the age of 16 in 2013. She plans to continue to ride until it’s time to pack up and move to law school.

“I will stay here (at Indiana Grand) and ride until law school starts,” said Patrick. “You are not allowed to have a job the first year of law school because it’s a full time job, so I’m not sure how much I will ride after I start school. Also, I’m supposed to do an internship in the summers. I will be a journeyman by then, so maybe I will ride a few here and there next summer.”

Horses will always be part of Cheyanna’s life. The former National Barrel Horse Association All American Youth World Title holder still has four or five barrel horses and plans to always stay in touch with that aspect of competition.

“Even after I graduate, I will always have barrel horses and will compete,” said Cheyanna. “I will always be involved in horses in some way.”