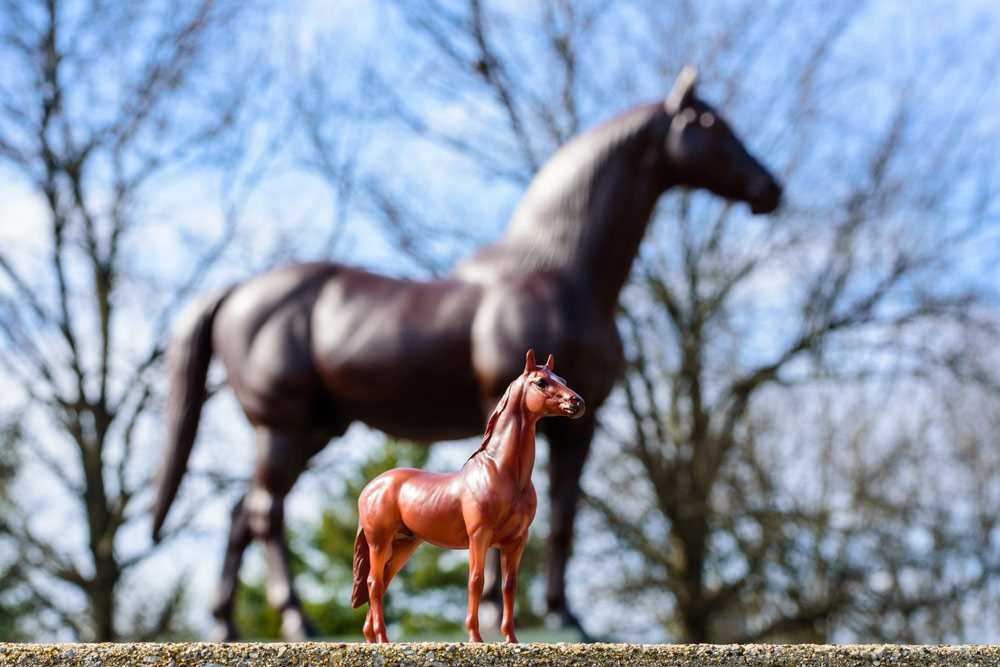 Breyer will join the Kentucky Horse Park in honoring the 100th birthday of the legendary Man o’ War with a new Classics portrait model of the racing legend. Man o’ War (March 29, 1917 – November 1, 1947) is widely considered to be one of the greatest racehorses of all time. The chestnut Thoroughbred stallion, nicknamed “Big Red” was not only a legend of the turf (Champion Two Year Old Colt, Three Year Old Male, Horse of the Year) but he was also a prolific sire (Leading Sire in North America in 1926 and sire to the great War Admiral among others). His line is still prominent to this day. Man o’ War was named to the US Racing Hall of Fame in 1957.

The Kentucky Horse Park, home of the final resting place of the legendary racehorse, Man o’ War, is having a year-long celebration in honor of Big Red’s 100th birthday anniversary this year. The park’s iconic life-size bronze statue of Man o’ War is a popular tourist destination. His sculpture was sculpted by Herbert Haseltine and it was installed at Faraway Farm over his grave in 1947. In 1977, both the statue and Man o’ War’s remains were moved to the Kentucky Horse Park where they remain to this day. The statue was fully restored last year.

In honor of Man o’ War’s 100th celebration, Breyer will be releasing a Classics portrait model originally sculpted by Maureen Love. Breyer’s centennial edition Man o’ War model will feature the iconic black and yellow colors of his owner Samuel Riddle in a contemporary treatment designed especially for the Man o’ War Celebration presented by Windstream. Breyer’s Man o’ War model will first be available through the Kentucky Horse Park, and then will be available to all Breyer retailers by mid-July.