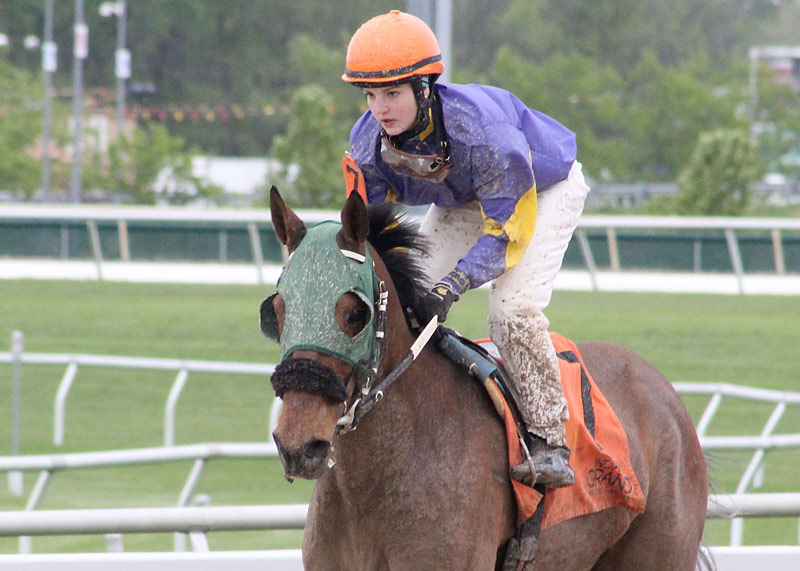 Apprentice jockey Katie Clawson is off to a roaring start at Indiana Grand Racing & Casino. The 20-year-old resident of Brazil, Ind. is in contention for the top spot among the leading Thoroughbred riders this season, which could put her in line to make history in the state of Indiana.

Born in Arizona, Clawson had a unique journey to the racetrack. Her love of horses prompted her parents to sign her up for riding lessons in Arizona before the family relocated to Brazil, Ind. when she was seven. She continued her love of horses and when she was old enough, the home-schooled student got involved in 4-H. It wasn’t until she was channel surfing one day that racing even entered her mind.

“I’ve always been a horse girl and when I was 11 or 12, I found TVG while I was channel surfing,” said Clawson. “From there, I took an interest in racing and began watching some of the horse racing movies. But it was Zenyatta that hooked me on racing. I saw her on TV when she won her 12th or 13th race and that was it for me. I knew that was what I wanted to do.”

Through a fellow horse friend, Clawson began to meet people in the horse racing business and eventually landed a job at Steve Fosdick’s farm in Carlisle, Ind. She helped him break babies and learn the initial techniques of galloping Thoroughbreds for two years. Her first experience at a racetrack was in 2014 when she galloped horses at Indiana Grand, working with trainers such as Fosdick, Mike Lauer and joining Tom Amoss’ team at the end of the season that led her to Louisiana for the winter. At the age of 17, she had a full time job in racing.

“It was a slow process but I finally started learning about being a jockey,” said Clawson.

Clawson’s skill set was noted by trainer Kellyn Gorder and she worked her way up for approval as a jockey, riding in her first race at Churchill Downs in July last summer on one of Gorder’s horses. A week later, she earned her first win on one of Gorder’s horses, Street Thunder, at Churchill Downs and the momentum began. Many people have helped her along the way, from trainers to jockeys to agents and even her valets, but one man in particular gets a little extra credit for preparing her as a jockey.

“When I worked for Kellyn (Gorder), I worked with his assistant, John Ortiz, a lot,” said Clawson. “His dream was to also be a jockey, and now he is out on his own as a trainer. I learned a lot from him on race riding and he pushed me out of my comfort zone, which is what I needed.”

To date, Clawson has 23 career wins heading into the early part of May. She has competed at seven different tracks so far in her career. Her talent exploded Saturday, May 6 when she guided home three winners on the card, her first triple win evening.

“When I got my second win, I was excited because that was my third double win night,” said Clawson. “I thought I had a shot with my last horse of the night (Atlantic Slew) and then trainer Cipriano (Contreras) told me he thought the same. It was a lot of fun.”

Clawson’s choice to choose Indiana Grand as her summer base came with a lot of deliberation. However, in the end, it set her up to tackle a lot of things that are important to her as she continues on her career path.

“I had a lot of pros and cons about where I wanted to go this year, but getting Jimmy McNerney as my agent was a big factor,” said Clawson. “Also, it was close to my family in Brazil and it is close enough to Kentucky to keep my connections there.”

Seeing her family is a weekly gig she tries to keep. Clawson makes the trip back to Brazil once a week to catch up with family members, stay active in church, and share a passion with the entire Clawson clan.

“We are a big baseball family,” added Clawson. “We love the Arizona Diamondbacks. I don’t get to keep up with them as much now, but when I go home, my family always has their games on.”

Staying in the Midwest also has its advantages for staying close to her future family. Clawson is engaged to Nolan Ramsey, the grandson of famed Thoroughbred owners Ken and Sarah Ramsey. He works as an assistant trainer for Mike Maker and is currently overseeing the string in New York. Clawson and Ramsey are already working on a plan for next winter.

“We have already discussed our winter plans and will try to work it out where we will be together this winter,” said Clawson.

For now, Clawson will continue to perfect her skills as a jockey and work to put wins on her record. She’s well on her way to join the list of successful female riders on the Indiana circuit from years past.

Indiana has always been the home to several successful female riders. From the very beginning at Hoosier Park in the mid 1990s, jockeys such as Jerri Nichols, Paula Bacon, Mary Jo Brennan and Cindy Noll were among the top 10. But outside of Cindy Noll’s second place finish in the standings in 2001, no female has gotten close to the top spot at either Hoosier Park, where Thoroughbred racing was completed in 2012, or Indiana Grand, which has been in operation since 2003. In recent years, female jockeys such as Jaleina Farrell, Rhonda Collins, Carol Cedeno, Oriana Rossi and Cheyanna Patrick have cracked the top 10 in the Thoroughbred standings, with Cheyanna Patrick earning the Juan Saez Leading Apprentice Jockey award in 2015. The elusive leading Thoroughbred jockey title in Indiana still remains open for a female to seize the spot. Clawson may be the jockey that breaks that glass ceiling.