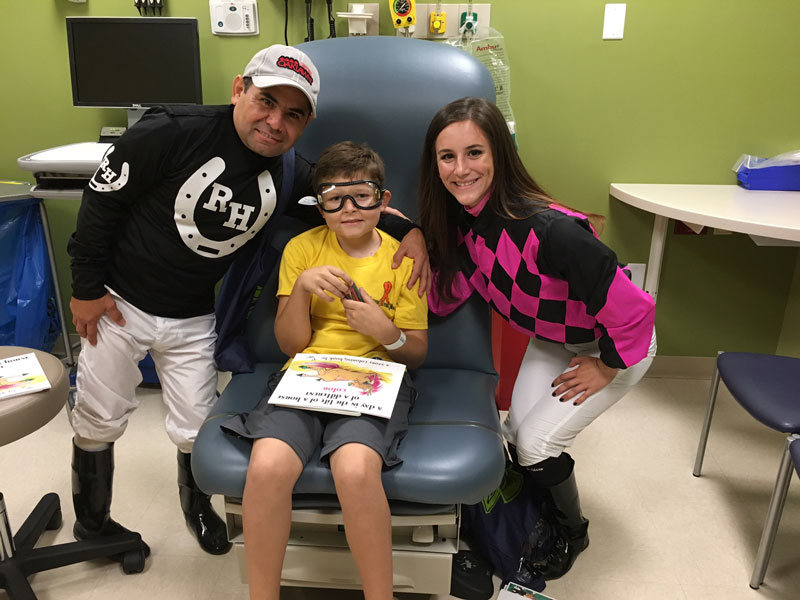 Eddie Perez and Erica Murray represented the jockey colony at Indiana Grand Racing & Casino Thursday, Sept. 7 during the annual visit to Riley Hospital for Children in downtown Indianapolis. The trip is conducted by the jockeys with support from The Jockey’s Guild and Indiana Grand to bring awareness to Childhood Cancer Awareness Month during the month of September. There are many ways support the fight against cancer, including making your own donation. View it for more information on how you can help.

Perez and Murray visited several children in various areas of Riley Hospital specializing in cancer treatments. Their first stop was on the cancer unit floor followed by a trip to the cancer clinic that provides outpatient services. The jockeys handed out horse racing coloring books and crayons along with goggles to the patients. They also autographed several items for the kids and stopped for photos along the way.

Perez, a native of Mexico, is a 27-year veteran with nearly 2,500 career wins. He was attending his second straight visit to Riley in support of Childhood Cancer Awareness Month. Perez is currently ranked among the top 10 jockeys at Indiana Grand and recorded four wins on the program Wednesday, Sept. 6.

“This is something I look forward to participating in every year,” said Perez. “I really enjoy visiting the kids. And, a couple of them really like horses, so it was nice to talk with them and tell them about our job as a jockey.”

Murray, a native of Louisiana, is new to racing. The apprentice rider began her career at the age of 17 at Fair Grounds in her home state before venturing to the Midwest last summer. She has been very active all season with various charitable events with the jockeys and will celebrate her 20th birthday next week.

“This is the first time that I’ve gone to Riley Hospital but I went to one other hospital visit before at another track,” said Murray. “It’s hard to keep your emotions from showing at times. It’s very rewarding to visit with the kids.”

The annual trip to Riley Hospital for Children leads into Boots ‘N Brews Saturday, Sept. 9 at Indiana Grand that includes the official kickoff for Childhood Cancer Awareness Month at Indiana Grand. Jockeys will wear gold ribbons on their boots and pants during the entire month of September to signify their support of kids battling cancer.

To help with the official kickoff Saturday, cancer survivor Cierra McCauley, daughter of Marci and Michael McCauley of Elizabethtown, Ind., will be trackside to raise funding and awareness for her “Reason to Dance” campaign in support of Riley Hospital. The McCauleys, longtime Thoroughbred owners and breeders, contacted The Jockey’s Guild in 2014 after Cierra was declared cancer free at the age of eight. The Jockey’s Guild showed full support of the cause and a national movement began. Jockeys all across the country now wear gold ribbons during September and also coordinate visits to children’s hospitals, particularly the cancer divisions, all across the nation.

Now 12, Cierra has a deep passion for dance and has been going to different venues all year teaching a dance she created that is linked to her involvement with the Indiana University Dance Marathon each November. Donations will be accepted during Saturday’s Boots ‘N Brews for the cause and guests are encouraged to learn the dance from Cierra outside the winner’s circle from 6-7 p.m.