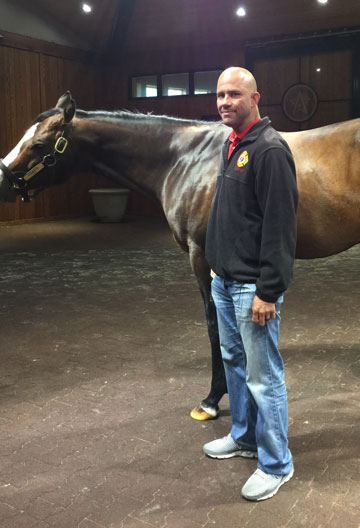 An overflow field of 2-year-old fillies will travel one mile in the $60,000 Happy Ticket, one of the seven turf stakes on Saturday’s Super Derby program at Louisiana Downs.

The race is wide-open with many lightly-raced fillies competing in stakes company for the first time. Aim Spot broke her maiden at first asking at Louisiana Downs on July 25, drawing off by over five lengths in her five and one-half furlong main track debut. Her breeder and owner, Autry Lowry Jr., resides in Bossier City and has been a firefighter, serving the Benton Fire Station, in Bossier Parish Louisiana, for 15 years.

Last week, the call went out to the men and women who protect the citizens of Louisiana that responders were needed in Houston to deal with the flooding from Hurricane Harvey. It was Lowry’s day off, but within 45 minutes, he and a fellow fireman were on their way to Houston to assist with rescue efforts.

“He had a flat bottom air boat, so we got the call that elderly couple and three children were in an emergency,” said Lowry. “The water was so deep in their home that all five were forced to the attic, waiting to be rescued. The water level had risen 18 inches in less than 30 minutes.”

Obviously, a veteran fireman has seen his share of life-threatening situations and emergencies through the years, but the extent of the flooding crisis in Houston even had him shaken.

“There’s nothing you can do to mentally prepare yourself for the devastation you see,” he admitted.

Safely back home in Louisiana, Lowry is looking forward to a good effort, and hopefully a victory on Saturday’s Super Derby card by his homebred Aim Spot.

His filly is a daughter of Overanalyze out of a mare he owns named Aut’s Maddie.

“I named my mares after my daughters, Caroline and Maddie,” explained Lowry. “Caroline is attending LSU. Our younger daughter, Maddie, is nationally-ranked in archery. As good as she is now, she had major difficulty finding her aim spot; hence the name of this filly!”

Trained by Ruperto Urbina, Aim Spot will break from post nine under Jose Guererro. The bay filly is 12-1 on the morning line, but her owner is hopeful she will fare well in her second career effort and stakes debut.

“She’s been training really well,” said Lowry. “Plenty of blood, sweat and tears go into breeding and racing horses. There are way are more lows than highs, but my family will be at the track Saturday cheering on our filly.”

It’s hard not to root for a firefighter, family man, and horse lover. Seems like a nice trifecta!

Mr. Misunderstood Leads the Field in the $200,000 Super Derby
Seven turf stakes will be contested on Saturday afternoon at Louisiana Downs, highlighted by the running of the $200,000 Super Derby. The richest race of the 2017 Thoroughbred season is written for 3-year-olds going a mile and one-sixteenth on the Franks Turf Course.

Flurry Racing Stable LLC’s Mr. Misunderstood was the winner of the $60,000 Super Derby Prelude, here on August 5. That victory gave the gelded son of Archarcharch, who is undefeated in each of his four turf starts, a berth into the Super Derby. Trained by Brad Cox, the Kentucky-bred will break from post position four under jockey Chris Rosier at odds of 9-5.
The field from the rail with jockeys: Fast Talkin Man, Luis Quinonez; Gorgeous Kitten, Colby Hernandez; Flying Honeypot, Carlos L. Marquez; Mr. Misunderstood, Chris Rosier; Sonneteer, Gerard Melancon; and Phat Man, Roberto Morales.

Handicapping Preview Show Gets Underway at 11:00 am
Louisiana Downs track announcer John McGary and regional racing publicist Martha Claussen will team up for a pre-race handicapping preview at 11:00 am in the Inside Rail, located on the first floor of the grandstand. They will offer analysis of each of the races on the Super Derby card as well as the All Stakes Pick 4.