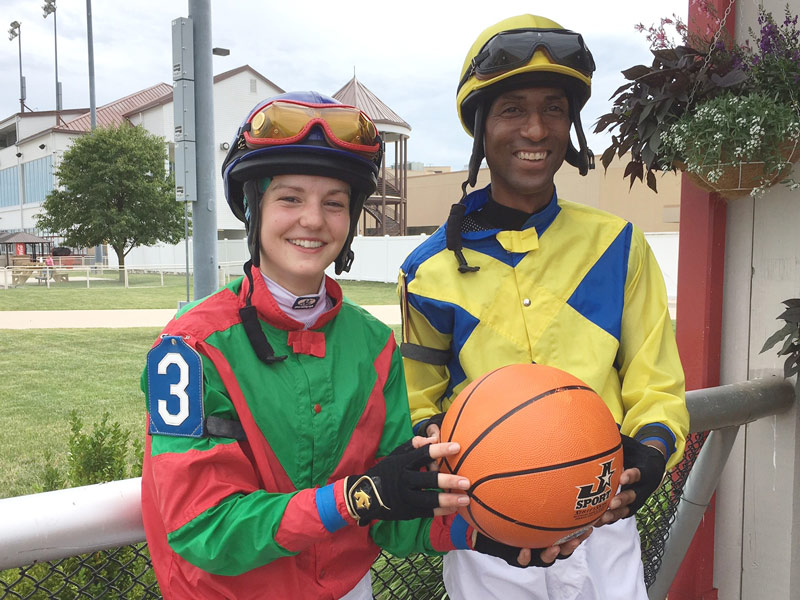 Indiana Grand jockeys Katie Clawson and DeShawn Parker know a thing or two about competing on the track. They will transpose that trait over to the basketball court Friday, July 14 for a special “Kings of the Court” competition with Lance Stephenson and Joe Young of the Indiana Pacers. The event is part of a special Indiana Derby eve celebration tagged as “A Royal Feast Fest” featuring live entertainment, music and various food options.

Clawson, who hails from Brazil, Ind., played multiple sports growing up. Although her family is prone to baseball, she does have a little experience on the basketball court, competing one year at St. Patrick’s Catholic School in Terre Haute before her love of horses took over. The 20-year-old apprentice rider has been competing for a little more than a year and is currently the leading jockey at Indiana Grand with 50 wins in the first 48 racing programs.

“I’m looking forward to meeting the NBA players and having some friendly competition on the court,” said Clawson. “It should be a lot of fun for DeShawn and I.”

Clawson will be joined by Parker, who is also spending his first year at Indiana Grand. Parker, a native of Cincinnati, grew up in a sports infused family and has always been a University of Cincinnati fan, even possessing a “bearcat” tattoo on his arm. Standing at a unique height of 5’10 for a jockey, Parker has more than 5,200 career wins and is horse racing’s all-time leading African American jockey in wins. He is currently among the track’s top five jockeys at Indiana Grand.

“I’ve actually had a ‘Bearcats’ tattoo on my shoulder since I was 17,” said Parker. “I’ve always followed sports from UC. In fact, that was where I was going to go to college if I hadn’t gone into riding full time. I’ve played ball in the past but it’s been a while. I need to get to ‘Dave and Busters’ and start practicing. It will be fun to meet the Pacers, especially Lance Stephenson, since he went to UC.”

The duo of Clawson and Parker will be decked out in Indiana Derby jerseys for the competition with Stephenson and Young. Stephenson, former Big East Rookie of the Year from the University of Cincinnati, will be joined by Houston, Texas native Joe Young in the exhibition event. The “Kings of the Court” competition will take place at approximately 7:30 p.m. during an evening tagged with food, music and fun. “A Royal Feast Fest” will get underway during live racing that afternoon with two stages for live entertainment. The area will also be flanked with various food options, including cotton candy, sno cones, and cookies to benefit two area charities, the Morristown High School Chorale program and the Shelbyville High School Post Prom committee. The “Kings of the Court” competition will lead into a performance by The Devonshires beginning at 7:45 p.m. on the main stage at Indiana Grand.