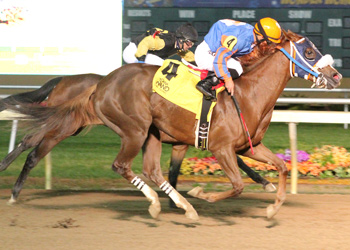 Indiana Grand brought the curtain down on its 2015 Thoroughbred meet with a quartet of stakes for Indiana-breds on Indiana Champions Night.

Easy Victory and Jockey Fernando De La Cruz kept their record perfect with a very convincing win in the 18th running of the $85,000 Miss Indiana Stakes.

Easy Victory has a lot of speed and was moving into her first two-turn race in the Miss Indiana Stakes. The added distance didn’t seem to faze the two-year-old chestnut filly by Lost Victory as she rallied out to the top spot in the one mile and 70 yard race and never looked back. De La Cruz sat Easy Victory two wide down the backstretch and Sassy Miss Officer and Orlando Mojica tried to take advantage of a lane on the inside and move up, but their time at the top was very brief.

Owned by Shawn Strain, Easy Victory completes her two-year-old season undefeated in three starts. She returns to her home base at the Strain farm with more than $120,000 in earnings.

“This filly (Easy Victory) is really a smart filly,” said Trainer Steve Fosdick, who has had the filly from the very start. “We broke her at the farm in Oaktown (Indiana) and from the start, she showed a lot of potential. From the first time we started breezing her, nothing could keep up with her. She will head back to the owner’s farm now for a break.”

Fosdick will return to his farm in Oaktown, Ind., just north of Vincennes, Ind., and turn his focus on breaking babies. He plans to race a few horses at Churchill Downs and run a few horses at Turfway Park but his main goal will be to get prepared for the 2016 race meet at Indiana Grand in the spring. This is the first Thoroughbred for Strain, who also has some racing Quarter Horses. Fosdick noted that Easy Victory has a half brother that is a Quarter Horse that is a weanling now and they hope inherited some of her speed once he’s of racing age.

Fosdick was also presented with the award for Winningest Horse of the Meet. His horse, First Beach, completed the year with five wins and one second to earn the honor. Jon Schuster, vice president and general manager of racing, made the blanket presentation to Fosdick during the final night of racing for 2015.

Derby Express on a mission in Indiana Futurity

Derby Express was on a mission Saturday, Oct. 31. The two-year-old son of Unbridled Express got to the lead early and never slowed down, rolling to his third straight win in the 18th running of the $85,000 Indiana Futurity at Indiana Grand.

Malcolm Franklin was aboard Derby Express just like his previous five career starts. The duo left the gate like a rocket and got to the lead in the one mile and 70 yard race. Down the backside, El Coco Loco and Olaf Hernandez thought they would test Derby Express a little and moved up on the inside of him briefly, but Derby Express wanted no part of being passed in any portion of the race. He came back and fended off the competition to the head of the stretch.

In the stretch, Franklin was on the lead, but wanted to see if he had more horsepower. He gently asked the colt for more speed and Derby Express responded with authority. The grey colt opened up to an eventual five and one-quarter length victory to score his second straight stakes victory at Indiana Grand. Double Tuff and Albin Jimenez finished second while R Luckey Charlie and Richard Bracho was the best of the rest for third.

Derby Express is owned by Sherri Greenhill and trained by Jeff Greenhill. He was bred at the couples farm, Greenhill Racing.

“This horse (Derby Express) is kind of like our American Pharoah,” said Greenhill, referring to American Pharoahs win earlier in the day in the Breeders Cup Classic. “He was the speed of the race and although he’s not as great as American Pharoah, we treat him like he is. He proved tonight he could get two turns. We have a few options. His half brother, Needmore Cash, really took to the polytrack at Turfway last winter, so we are not ruling out Turfway Park for him. Normally our Indiana breds get a break after the meet but I’ll see how he comes out of the race.”

Derby Express increased his earnings to more than $169,000.

Bucchero scores mild upset in To Much Coffee Stakes

Bucchero would not back down and rallied home as the winner in the 17th running of the $150,000-added To Much Coffee Stakes at Indiana Grand Saturday, Oct. 31. The race is named in honor of the horse, To Much Coffee, who was a stakes winner and standout during the early years of pari-mutuel racing in the state of Indiana in the mid 1990s.

Despite finishing second in his last start in the $85,000 Hoosier Breeders Sophomore Stakes, Bucchero was not the bettor’s choice in the full field of 12 for the To Much Coffee Stakes. The three-year-old chestnut son of Kantharos began his journey from post two and showed good early speed to grab the lead from the start of the one and one-sixteenth mile race. Country Minister and Rolando Aragon stayed close to the leaders and presented a challenge for the top spot down the backstretch but Bucchero responded for Fernando De La Cruz and retook the lead heading into the final turn.

In the stretch, Bucchero was in the sights of several horses trying to make up ground in the late stages of the race, but he was relentless, showing off true grit all the way to the wire to win by one and one-half lengths over Mister Pollard and Jon Court, last year’s winner of the To Much Coffee. I Like Beer and Orlando Mojica maintained ground for third.

Bucchero paid $10.60, $5.40, $4.00 across the board. He earned his second win of the year in five starts for Harlan Malter’s Ironhorse Racing LLC. Heather Hall serves as trainer for Bucchero, who now has more than $210,000 in career earnings.

With only one start as a two-year-old last year, Bucchero returned to the track in July at Delaware Park before making a stop at Saratoga and PARX Racing in Philadelphia. His win in the To Much Coffee Stakes marks the first time De La Cruz had ridden the horse. De La Cruz finished the 2015 race season in second place in the jockey standings. He was leading rider at Indiana Grand in 2014. Bucchero was bred by Southern Chase Farm and Karen Dodd in Williston, Fla. He was a $43,000 purchase by Malter from the sales in Ocala in the spring of 2014. The time of the race in the To Much Coffee Stakes was 1:43.82.

Lady Fog Horn has been nearly perfect this season at Indiana Grand. She added her fourth straight stakes victory to her credentials Saturday, Oct. 31, closing out the 2015 race meet on a four-race win streak.

Ridden by Albin Jimenez in all of her starts at Indiana Grand in 2015, Lady Fog Horn has shown true ability throughout the year. The three-year-old daughter of Zavata proved just how tough she could be in the 19th running of the $150,000 Frances Slocum Stakes Saturday, Oct. 31.

Starting from post three in the bulky field of 12, Lady Fog Horn showed good acceleration from the starting gate and landed close to the leaders during the early portions of the one and one-sixteenth mile race. Down the backstretch, she began to move up and took control of the top spot before the final turn. Her dominance continued into the stretch where she lengthened her stride and rolled home a winner by seven and one-quarter lengths as the heavy favorite of the race. Elegant Model and Pablo Morales held on for second while Joyous Lady and Tommy Pompell rounded out the top three.

“She (Lady Fog Horn) is a special horse,” said Jimenez, who flashed up four fingers for her fourth straight stakes win as the duo passed under the wire. “She is a horse that stands out for me for the meet.”

Lady Fog Horn is trained by Tony Granitz and is owned by Stuart Grant’s The Elkstone Group LLC. The Indiana bred now has eight career wins and earnings of nearly $400,000.