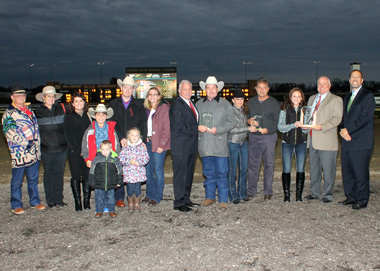 The Patrick Family is no stranger to success in the state of Indiana. Their stable has competed in almost every season since pari-mutuel racing was introduced in 1995 in the state. However, Gary, Cindy and Cheyanna Patrick took their success one step higher by earning the Leading Trainer, Leading Owner and Leading Apprentice Jockey awards, which is a first in the history of racing.

Gary, who is the track’s all-time leading trainer, completed the 120-race meet with 40 wins and purse earnings of $919,905. The Circleville, Ohio native now has a tally of 281 training wins lifetime at Indiana Grand over Tom Amoss with 229 career wins. The Patrick Stable is unique in the fact they own all of their own horses, making their operation a true family-oriented business.

“This is so exciting to win this award this year and it’s really special since no one has ever done this before,” said Patrick on winning three of the categories with his family members. “To be atop the standings with my wife and daughter is fantastic. If I didn’t have Cindy and Cheyanna beside me, our season wouldn’t be like this. To win this many races and own and train all of the horses is very special.”

Patrick noted that one of the highlights of the season came from the performance of Daddy Justice, who he acquired through a purchase last year. The three-year-old son of Lantana Mob won three stakes races during the meet and completed the 2015 race meet with four wins in seven starts worth nearly $200,000 in purse earnings.

“We buy and race a lot of horses,” said Patrick. “Daddy Justice is the best horse I’ve ever had. He’s just a special horse and has made this meet extra special.”

Cindy led the race for leading owner the entire meet. A former jockey herself, she accumulated 37 wins with purses in excess of $843,000. Cindy, who won the leading owner title in 2014, broke her own record of 33 wins last season to establish a new record for most wins in one meet. She also broke the record for most purse earnings by an owner in one season, passing Maggi Moss’s previous record of $747,763 set in 2013. Cindy is now ranked in the top 10 of all-time leading owners at the track. Ironically, Gary still holds the top spot as the track’s all-time leading owner with 201 wins.

“This is a pretty nice honor,” said Cindy. “It takes a lot of hard work and dedication. We had horses at both the track and our house. Every day, we had something on the trailer going back and forth.”

Gary and Cindy’s only child, Cheyanna, is a success story in many ways. The now 19-year-old won several titles on the National Barrel Horse Association (NBHA) circuit, winning the All American Youth World as well as titles as Indiana State Champion in the Youth and Open divisions and National Reserve Champion. She began riding Thoroughbreds in 2013 and won 15 races as an apprentice last year at Indiana Grand. She returned this season to earn 26 wins in limited starts due to her obligations with college. Cheyanna is currently a junior at University of South Florida – Tampa where she is studying pre-law and has a goal to become a lawyer for the horse industry in the future.

Cheyanna becomes the winner of the inaugural Juan Saez Leading Apprentice Jockey award. The award was named in honor of Saez, who was the leading apprentice rider at Indiana Grand in 2014. Saez was tragically killed in a racing incident on Oct. 14, 2014. To honor and keep his memory alive, the award was named in his honor beginning in 2015.

“It’s really special to me to win this award because I knew Juan (Saez) and rode with him,” said Cheyanna. “As soon as I knew about the award being named in his honor, I wanted to try really hard to win it. To be standing here with my mother and father for awards is also very special.”

Cheyanna, who rode for other trainers for the first time in 2015 at Indiana Grand, was represented by jockey’s agent Shannon McGovern during her time in Indiana. Cheyanna returned to college in mid-August and still had a strong enough lead with 26 wins to secure the Saez Leading Apprentice Jockey award.

The Patricks were presented with their awards on the final night of racing for 2015 at Indiana Grand. Kevin Greely, director of racing, Jon Schuster, vice president and general manager of racing, Brian Elmore, vice president of racing at Centaur Gaming and Steve Cahill, clerk of scales, helped make the presentation to the Patricks. They were surrounded by several family members who had come in for the ceremony. Family members included Gary’s son, Johnny Patrick, and his daughter, Amy Happenny, as well as Cindy’s father, Charlie Ridley and his wife, Sandy, who drove in from their home in Oklahoma City, Okla.

Ridley provided a hand-crafted exercise saddle for a silent auction to benefit Oriana Rossi, who was injured in a racing incident in July at Indiana Grand. The final tally on the saddle was $1,600 and the winning bid came from a group of four owners from the Randy Klopp Stable.

“I usually give five saddles a year for auction for different charities and wanted to do something for Oriana here at Indiana Grand,” said Ridley. “I’m really happy it brought this amount for such a good cause.”

It was a strong meet for Jockey Albin Jimenez from start to finish. Jimenez took the lead in the race for leading jockey at Indiana Grand Racing & Casino in mid May and never looked back, becoming only one of three jockeys at the track to ever surpass 100 wins in one race season.

A native of Panama, Jimenez completed the 2015 race meet with 108 wins and purse earnings in excess of $2.7 million. The native of Panama won several stakes throughout the season, including five aboard Lady Fog Horn, who granted Jimenez his final win of the meet in the $150,000 Frances Slocum Stakes on closing night Saturday, Oct. 31.

“First of all, I have to give credit to God,” said Jimenez. “He has been very good to me. I also want to thank all the trainers and owners for giving me the opportunity to ride and a special thanks to Jimmy (McNerney) for all of his hard work for me as my agent.”

Jimenez’s rode to his first title at Indiana Grand was not smooth. He missed five total weeks of action during the 120-day race meet due to injury, including a four-week absence that began the week of Indiana Derby, which sidelined him from riding for nearly a month. But the break only motivated Jimenez to get back in the saddle and win races. Even though he was absent from racing during that time, he was still able to maintain his spot atop the standings for his return to riding.

“When I was coming back from the injury, I felt so good and wanted to take the title,” said Jimenez. “It made me really work hard to keep toward that goal. This title feels great and I’m excited to win.”

Jimenez will add his Leading Jockey title from Indiana Grand to his credentials that also includes Leading Jockey titles from Turfway Park. Jimenez, who has been riding in the United States since 2012, is a graduate of the Laffit Pincay Jockey Training Academy at Presidente Remon Racetrack near Panama City, Panama. He has been among Indiana’s top 10 jockeys since 2013 and with his tally of 108 wins from 2015, he moves into eighth place on the list of all-time leading jockeys at Indiana Grand with 233 career wins.

Jimenez was joined in the winner’s circle by his wife of four years, Marybeth, and their eight-month old daughter, Josaleen. Kevin Greely, director of racing, and Jon Schuster, vice president and general manager of racing, made the presentation to Jimenez, who went on to win two races on the closing night card.

The Jimenez Family now call Alexandria, Ky. home. Jimenez plans to ride in Kentucky over the winter and return to Indiana Grand when racing resumes in April 2016.