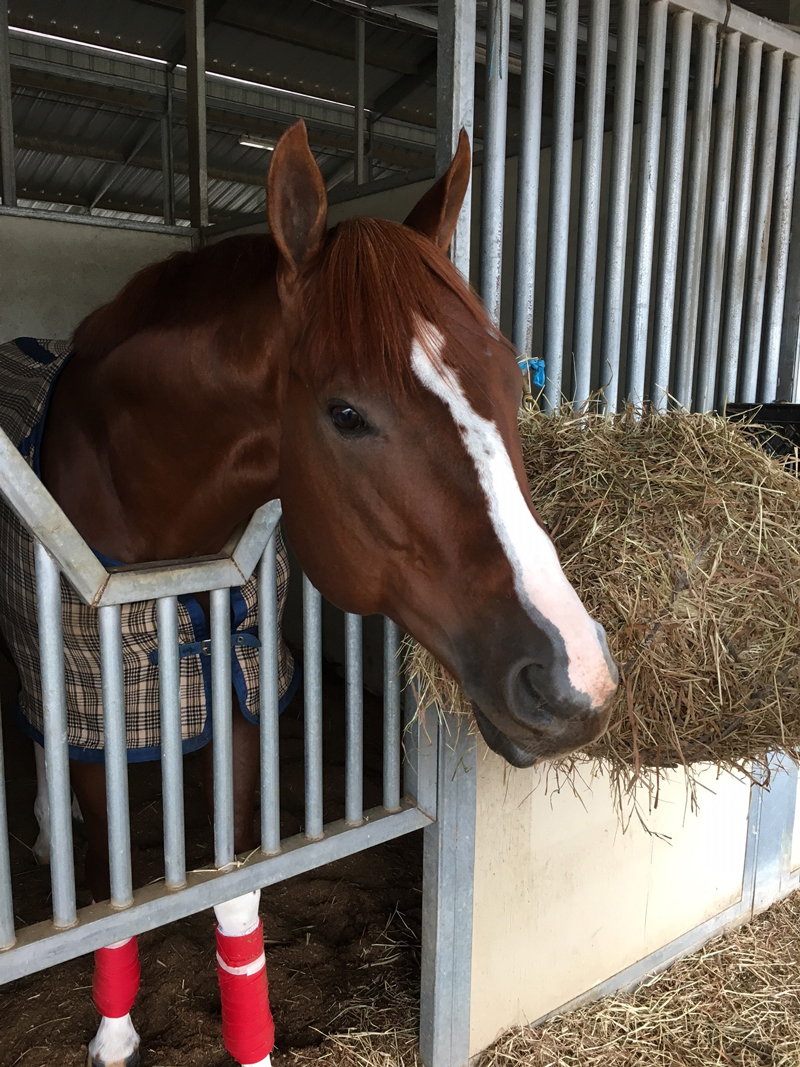 The Indiana Thoroughbred breeding program has grown by leaps and bounds since the implementation of pari-mutuel racing in the state beginning in 1995. As progress has been made, it has been mentioned many times that, ‘one of these days, an Indiana-bred will make it to the Breeders’ Cup.’ That day has arrived as Bucchero left the comforts of his stall at Indiana Grand Thursday and boarded a Tex Sutton Equine Air Travel plane this morning from Lexington, Ky. en route to San Diego. He will then make the final leg of his journey via van to Del Mar to prepare for the Grade 1, $1 million Breeders’ Cup Turf Sprint slated for Saturday, Nov. 4.

Trainer Tim Glyshaw has worked tirelessly since announcing that both Bucchero and Bullard’s Alley, who is slated to run in the Grade I $4 million Longines Breeders’ Cup Turf the same day, would be making the trek to Southern California. Many behind the scenes details had to be arranged and handled prior to making the journey to the Breeders’ Cup.

“I had to make sure we had $15,000 in Bucchero’s purse account and $50,000 in Bullard’s Alley’s purse account before Monday when we pre-entered,” said Glyshaw. “It must be in the account or they will not accept your entries. Then, we will have to add another $15,000 for Bucchero and another $50,000 for Bullard’s Alley before we enter. I’m sure larger stables have someone that handles all the details for them, but for us, it is just me and my wife, Natalie, and the barn help to get everything ready. It is a lot of expense and hassle, but it is well worth it.”

Glyshaw has purchased all new essentials for both horses for their trip to the Breeders’ Cup, from polo bandages to saddle towels. He wants to ensure both horses look their best leading up to their races. Because of the weight on the plane, trainers are limited to six bags of feed per two horses, which will provide the same dietary needs for Bucchero and Bullard’s Alley during their stay. Glyshaw called ahead to line up hay and straw upon their arrival at Del Mar.

Neither horse has been on a plane before, but Glyshaw has no worries about the trip via air to California.

“We will be eight days out of the race when they arrive, so I expect them to be fine,” said Glyshaw. “I’m working very hard to keep everything the same for them and keep their routines normal. They are both used to going out early to the track, so we will probably alternate days on that. We are going to do everything we can to win the race, but just to compete against the best horses in the world in their division is still an honor.”

Doug Morley, valet and exercise rider for Glyshaw at Indiana Grand, left with Bucchero from Indiana Grand on Thursday. He will accompany both horses on the plane to California. Glyshaw has a flight out Friday and will meet the team at Del Mar.

“Doug has galloped Bucchero for the last two years and that is something I didn’t want to change,” said Glyshaw. “He will also probably gallop Bullard’s Alley. One nice thing about the Breeders’ Cup is because of the European influence, they have to let you gallop on the turf, so Doug will be able to take both horses out on the turf so they can get a feel for it and see it.”

Since Bucchero was victorious in Keeneland’s Grade II $200,000 Woodford Stakes Oct. 7 and Bullard’s Alley’s win in the Grade I $800,000 Pattison Canadian International Stakes at Woodbine Sunday, Oct. 15, Glyshaw’s phone has not stopped ringing. He has done a total of 45 interviews with the media since the connections of both horses announced their decisions to enter the Breeders’ Cup. And, then followed the phone calls from agents. Many jockeys were in hot pursuit of the mounts on both of Glyshaw’s horses.

“We obviously can get riders that are top 10 in the country, but after Fernando (De La Cruz) won on Bucchero at Keeneland, there was no doubt he would ride him (in the Breeders’ Cup Turf Sprint),” said Glyshaw. “We offered for the Woodbine jock (Eurico Da Silva) to ride Bullard’s Alley in the Breeders’ Cup Turf, but he had prior engagements. We started hunting for a jockey and we just confirmed on Wednesday (Oct. 25) that Javier Castellano will ride, and that’s good, because that is a jockey that has sat on him before.”

Castellano, a four-time Eclipse Award winner for Outstanding Jockey, was aboard Bullard’s Alley earlier this year at Woodbine in the Grade III $125,000 Singspiel Stakes, finishing second. Castellano was inducted into the National Museum of Racing and Hall of Fame earlier this year. Both sets of owners for Bucchero and Bullard’s Alley are very supportive of their jockeys for the Breeders’ Cup races.

Bucchero is owned by Ironhorse Racing under the management of Harlan Malter, who resides in the Los Angeles area. Bullard’s Alley is owned by the Kentucky-based Wayne Spalding and Faron McCubbins. All owners will be trackside rooting on their horses for Breeders’ Cup along with some special guests of Glyshaw.

“Each trainer gets two tickets to attend Breeders’ Cup,” said Glyshaw, who was born and raised in Evansville, Ind. and later graduated from Indiana University. “My mom (Diane Whipkey) and her next door neighbor are going out. My mom paid for a lot of this venture into horse racing, so it’s only fair she sees the results.”

Bucchero will be one of two Indiana-bred horses involved in this year’s Breeders’ Cup races, giving Indiana race fans even more to cheer about. Piedi Bianchi, trained by Doug O’Neill, is slated to start in the 14 Hands Winery Juvenile Fillies the same day. The two-year-old Indiana bred filly sold for $80,000 at the Ocala Breeders’ 2-year-old in Training Sale in March of 2017for breeders Deann Baer and her husband, Dr. Greg Baer, DVM, who reside in Columbus, Ind. Baer is part of the team at Hope Veterinary Clinic in Hope, Ind. The Baers have been active Thoroughbred breeders in the state of Indiana for more than two decades.