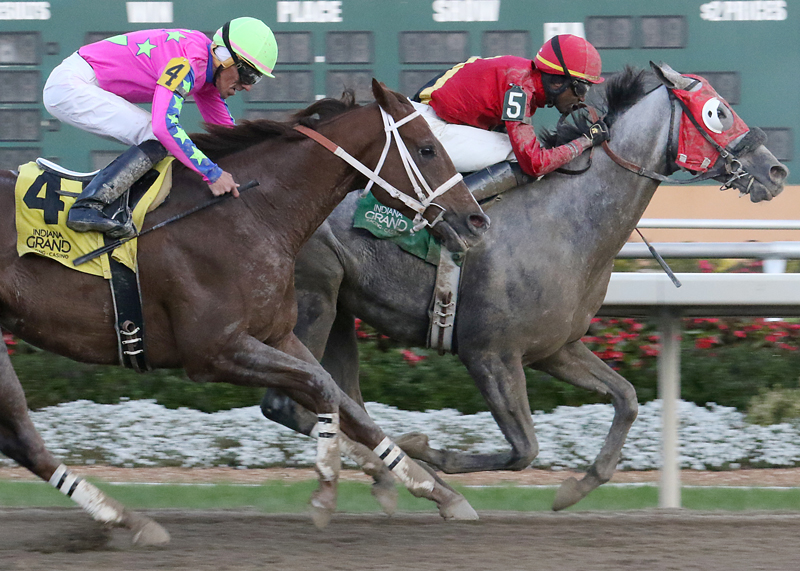 Huntstown and jockey DeShawn Parker rallied between horses in the lane to post a one-half length win in the $150,000-guaranteed To Much Coffee Stakes. The race, now in its 20th running, is named after the Thoroughbred mare, To Much Coffee, that established a track record in only the second year of pari-mutuel racing in the state of Indiana at Hoosier Park in 1996.

Starting from post five in the 11-horse lineup, Jockey DeShawn Parker had one goal during the race to not get locked in during the one and one-sixteenth mile event.

“Two starts back in the turf stakes (AJ Foyt), I got locked in and could never let him run,” said Parker, who has amassed more than 5,300 career win during his career. “I just wanted to make sure I kept him clear.”

Huntstown followed along in the early stages as Derby Express and Malcolm Franklin got the first call out of the gate tracked closely by Thunder Bye and Rodney Prescott. The two horses kept each other on the pace with Mr Manning and Francisco Torres sitting right behind, popping out a lane to find a clear running path.

In the final turn, the field began to bunch up more and Mr Manning was on the move on the outside. He quickly joined Derby Express in pursuit of the lead as Huntstown had slowly moved up into position behind the top two. At the head of the lane, a spot opened up and Huntstown was able to move between horses and the battle began. The top three were not going to give in without a fight that lasted nearly to the wire before Huntstown moved up for the win, just one-half length over Mr Manning for second. Operation Stevie and Albin Jimenez also moved up late to snag the third spot on the board.

“He (Huntstown) was doing it so easy down the backstretch, I just wanted to make sure I kept him clear,” said Parker. “Turning for home, it got a little tight, but once he saw some daylight, he took off.”

Huntstown, overlooked by the betting public, paid $54.00, $19.20 and $6.20 across the board. The Indiana bred gelding earned his fifth win at Indiana Grand.

“He got a good trip today,” said Trainer Wayne Mogge. “In his last stakes start, he never got going. He’s a nice horse and I’m glad to see him get this win today.”

Owned by Marion Wells’ Romar LLC, Huntstown earned his second win of the year in only his fifth outing. The grey six-year-old son of Unbridled Energy now has eight career wins and more than $300,000 in career earnings. After just a few starts at two, he was claimed by Wells and Mogge at the beginning of his three-year-old season at Indiana Grand and now has two stakes wins to his credit.

“We haven’t decided yet what we will do with him (Huntstown) for his next race,” noted Wells, who is based out of Paris, Ky. “We will get with Wayne and talk about it.”