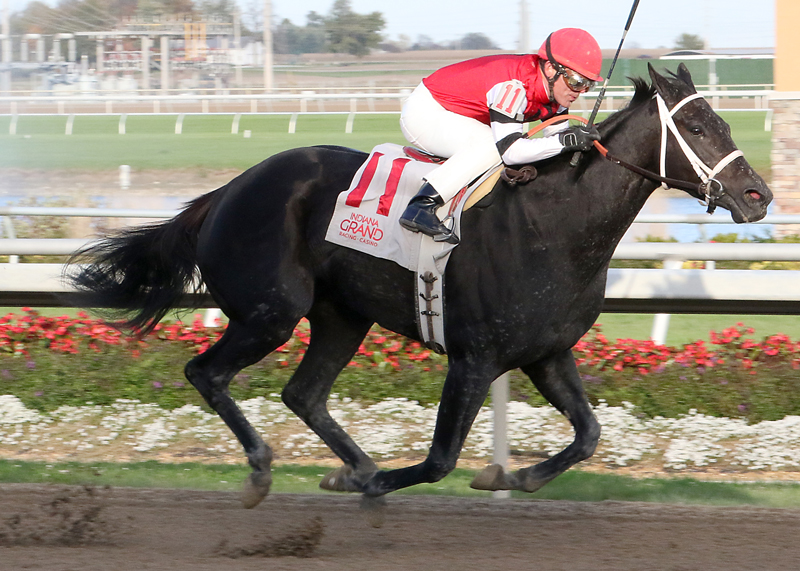 Express Run and Jockey Jon Court just missed in their last outing in the $100,000 Richmond Stakes at Indiana Grand but their start in the 21st running of the $150,000-guaranteed Frances Slocum Stakes had a different outcome. The seasoned mare sat patiently before making a strong move around the final turn, opening up to a three and one-quarter length win at the wire to stop the timer in 1:44.06 in the one and one-sixteenth mile event.

Court had to rally out of post nine in the 10-horse field but was able to sit alongside in mid pack. The action on the front became heated from the start as Marina’s Legacy and DeShawn Parker set the pace along the inside of Elegant Model and Rodney Prescott. The two opened up by nearly double digit lengths at times down the backstretch before the remainder of the pack began to close in.

Express Run was the first visible horse to make a move forward heading in to the final turn. The four-year-old Unbridled Express filly had her sights set on the top ones and at the top of the stretch, she was in control. Moving out to the lead, Court kept Express Run focused on her job and easily slid under the wire for an easy victory, her second of the year in eight starts. Whistle Stop and Marcelino Pedroza had stalked throughout and moved into second over Hay Little Bit and Alex Contreras, who closed well to finish a neck back in third.

“I could see them (the top two) pretty far out there,” said Court, who was Indiana’s all-time leading rider before relocating to Kentucky and then later to Southern California in the early 2000s. “I started to get a little anxious and then realized we still had lots of race left. When I called on her fairly early, I could tell I had a lot of horse, so I just nursed her to the top of the stretch. Then when I called on her again, I had a full bridle.”

Owned by Hillerich Racing LLC and L.T.B. Inc., Express Run paid $7.80, $4.80 and $3.40 across the board. She increased her career bankroll to nearly $300,000 with her most recent win for Bernie Flint, who also trains the Indiana bred filly.

“She (Express Run) stays here full time,” noted assistant trainer Shannon McGovern, who oversees operations for Flint for the Indiana string. “We just keep her happy. She is pretty easy to take care of. She’s kind of the queen of the barn.”

Express Run now has five wins in 23 career starts for Flint, who has campaigned her during her entire career. All five of her wins have been at Indiana Grand and the Frances Slocum Stakes marks her first career stakes win.

For Court, the win marked his sixth trip to the winner’s circle this season at Indiana Grand. He has shipped in to ride in specific races and has maintained a 67 percent “in the money” average as a result. Court, who is currently based in Kentucky, will return to Oaklawn Park in January.