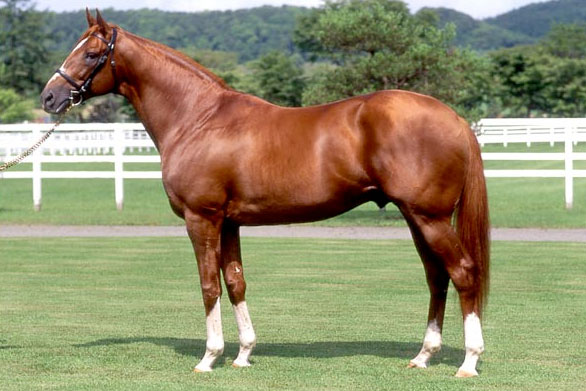 Old Friends, the Thoroughbred Retirement Center in Georgetown, KY, is proud to announce that Charismatic, 1999’s Kentucky Derby and Preakness winner and Horse of the Year, is coming home.

The now 20-year-old stallion will return to the United States from the JBBA Shizunai Stallion Station in Japan, where he has stood since 2002, sometime in late November, and will be pensioned at Old Friends.

His journey is being sponsored in large part by a gift from his former owners through the Robert and Beverly Lewis Family Foundation, and also from the Austin,Texas-based vodka brand, Tito’s Handmade Vodka.

This marks the third Kentucky Derby winner to be repatriated from Japan by Old Friends. In 2014 the farm welcomed 1997 champion Silver Charm (also owned by the Lewis family) and the following year 2002 winner War Emblem. With the arrival of Charismatic, Old Friends will become one of the only farms in the country to be home to three Derby Champions.

“This is yet another dream come true,” said Old Friends founder and President Michael Blowen. “Charismatic holds such special memories for so many racing fans, so it’s particularly meaningful to be able to bring him home.

“We’d like to thank the people at Narvick International, Megumi Igarashi, and the JBBA’s Kaori Matsuda for keeping us apprised of his career in Japan all these years and for making all of the arrangements for his trip,” Blowen added. “And, of course, we are eternally grateful to the Lewis family for their unmatched generosity and to everyone at Tito’s Vodka for helping us make this happen.”

“My family and I are so pleased to learn that our Horse of the Year Charismatic will be returning from Japan, and will be joining our beloved Silver Charm at Old Friends,” said Beverly Lewis, who campaigned the horse with her late husband, Robert. “Charismatic’s star shone very brightly, though only for a few weeks in 1999, when he won the Derby, the Preakness, and took a shot at Triple Crown immortality. Unfortunately, he was injured in that last race and was never able to run again, but now we are all looking forward to visiting him when he arrives!”

“Tito’s Handmade Vodka has been a staunch supporter of equine charities, and animal charities in general are near and dear to Tito’s heart,” said Eric Barlund, a VP of Sales for Tito’s. “We are ecstatic that we are able to participate in bringing horse racing stars like Charismatic back home where they can be revered by the public and help raise awareness for the cause.”

Bred by Kentucky by Parrish Hill Farm and William Farish and trained by Hall of Famer D. Wayne Lukas, Charismatic (Summer Squall – Bali Babe, Drone) had a career that was nothing short of a Cinderella story.

In February of 1999, the chestnut colt was vying in claiming races at Santa Anita, but by April he had surged to the top of the thee-year-old racing world by capturing the GR2 Coolmore Lexington Stakes at Keeneland. He went on to victories in that year’s Kentucky Derby and Preakness Stakes at long odds, and suddenly found himself at the threshold of becoming the world’s 12th Triple Crown winner.

In the Belmont Stakes, Charismatic took the lead and surged while a record crowd of over 85,000 cheered. Then he dropped back suddenly and was passed by eventual winner Lemon Drop Kid. As he crossed the finish line in third place, Charismatic was quickly pulled up having suffered multiple fractures in his left front leg.

In a very memorable moment, his jockey, the late Chris Antley, jumped off and held the colt’s leg off the ground until help arrived, thus avoiding more serious damage. As Daily Racing Form’s Jay Hovdey noted at the time: “The Triple Crown was lost, but Charismatic was saved.”

The injuries, while not life threatening, did end his racing career. But Charismatic earned that year’s Eclipse Award as Champion 3-year-old colt as well as Horse of the Year honors and retired with five wins from 17 starts and earnings of $2,038,064.

Originally sent to stud at Farish’s Lane’s End Farm, Charismatic was sent to Japan in 2002.

Plans call for the stallion to be shipped in late November. Arrival times will be announced when they are confirmed.