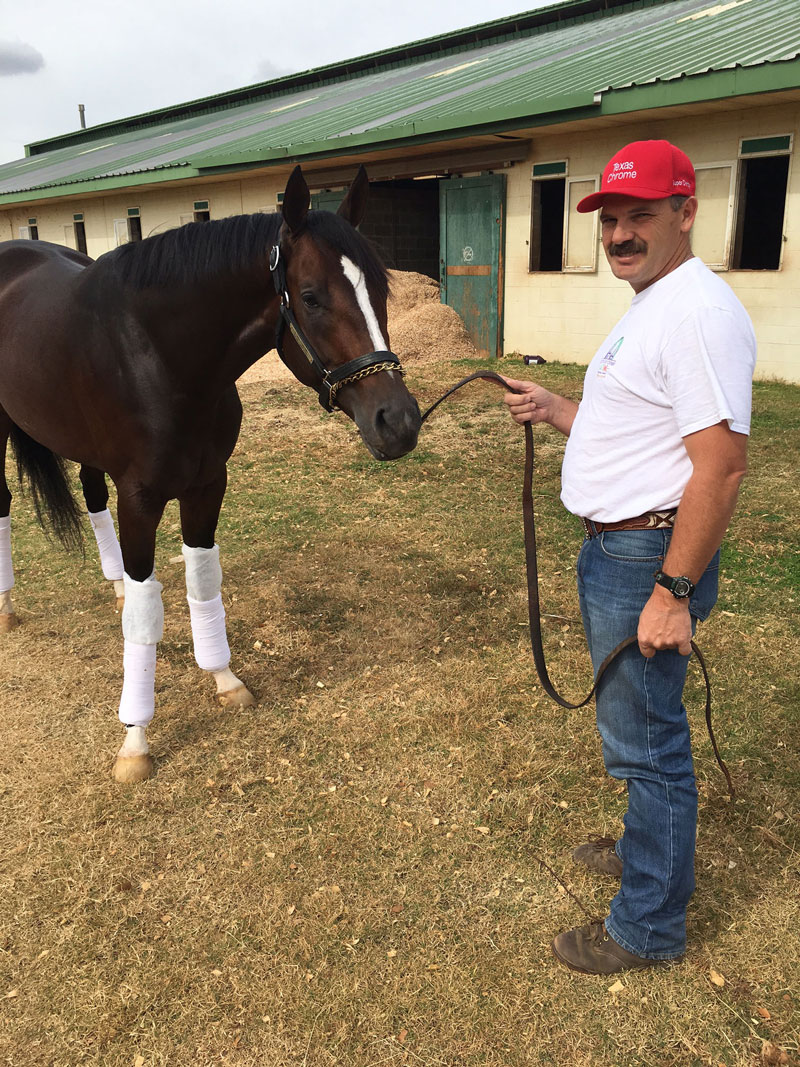 Grade 3 Oklahoma Derby winner Texas Chrome, a Texas-bred son of Texas stallion Grasshopper, put in his last official local workout on Monday morning at Remington Park and appears to be set to travel to Santa Anita Park and the Breeders’ Cup World Championships in early November.

“McMahon pumped his arms a little in the final 70 yards to push him at the finish, otherwise he would have been breezing,” Grothaus said. “He galloped out well at 1:15 3/5 for six furlongs.”

Owned by Danny Keene’s Keene Thoroughbreds of Greenville, Texas, the streaking Texas Chrome will face the world’s best at Santa Anita in Arcadia, Calif. on Friday, Nov. 4 in the Grade 1, $1 million Breeders’ Cup Dirt Mile. A 3-year-old colt out of the Naevus mare Margarita Mistress, Texas Chrome currently enjoys a three-race winning streak, all in stakes competition. He won the $100,000 Prelude Stakes at Louisiana Downs in Bossier City, La. in early Aug., prior to his triumph in the Grade 3, $400,000 Super Derby there on Sept. 10. Texas Chrome ran the streak to three straight when he squeezed inside of Sticksstatelydude, moving along the rail at the furlong pole, to battle to a half-length win in the Oklahoma Derby.

While the final time of the Monday morning workout won’t raise any eyebrows, how the workout unfolded and what it does for Texas Chrome is what Caldwell wanted for his charge.

“The work was a good solid work. He went slow early and finished up strong the way we wanted,” Caldwell said. “He galloped out really strong so it was more of a three-quarters (of a mile) work if you count the gallop out. He finished up the last half-mile in :48 (seconds) so that was the big punch coming home to finish and that was what we were looking for. He broke off slow, finished up strong and galloped out strong.

“He’s had a pretty hard campaign going from the Preview to the Super Derby to the Oklahoma Derby,” Caldwell noted. “Shortening from a mile and an eighth (Oklahoma Derby) to a mile in the Breeders’ Cup Dirt Mile, we want him to be fresh, happy and on his toes to keep up with the speed in the race. He has the conditioning to finish with them.”

Caldwell’s team spent most of Tuesday getting Texas Chrome ready, along with all of the gear needed to van him to Santa Anita with a scheduled departure from the Remington Park stable area at 6am on Wednesday morning. Assistant trainer Megan Houser will handle the shipping process with Caldwell to join her and Texas Chrome in Southern California this Saturday.

“He’s hauled all over the country and likes to haul, it doesn’t bother him so we’ll take two days to get out there with a layup about three-quarters of the way,” Caldwell said of the travel process. “We can’t take all of his luxuries; blankets, hay, feed and all that (on a plane) so basically we are taking his stall and all of his amenities that go with him. It’s not going to be like he’s really even left home.”

Bred by Craig Upham, Texas Chrome started his career with a maiden win and a victory in the TTA Sales Futurity at Lone Star Park. He also won the Gold Rush Futurity at Arapahoe Park last year. Now an earner of $842,462, Texas Chrome sold for $10,000 at the 2014 Texas Summer Yearling Sale from the consignment of Stoneview Farm, which Upham owns with his wife Sue Dowling.