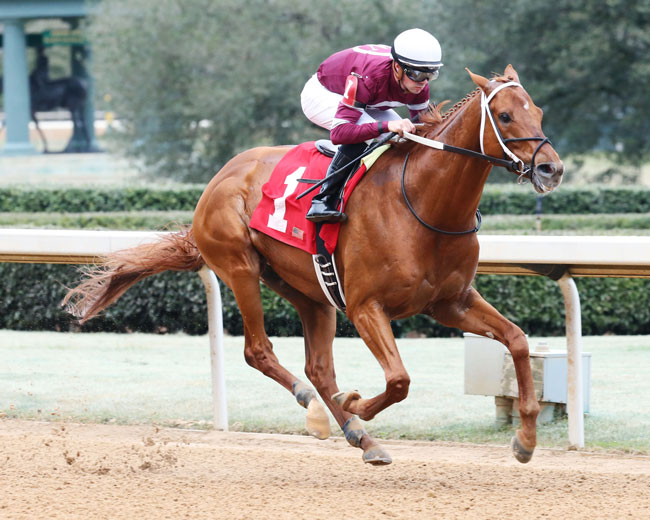 Winchell Thoroughbreds LLC and Three Chimneys Farm’s Gun Runner served notice that he intends to be a major player in the handicap division this year with his 5 ¾ length victory in Monday’s $500,000 Razorback Handicap (G3), the co-feature on Oaklawn’s Presidents’ Day card.

Two races before One Line won the $500,000 Southwest Stakes (G3) for 3-year-olds with Kentucky Derby aspirations, Gun Runner made a mockery out of the Razorback field in his four-year-old debut. He was sent to the lead by jockey Florent Geroux and from there he was never seriously challenged as he galloped through early fractions of :23 and :46 4/5 for the first half mile. The heavy 1-5 favorite was never asked by his jockey, who hand rode him to the wire. The final time of 1:40 4/5 for 1 1/16 miles was the fastest Razorback time since Lost Code won the race in 1988.

“Last year we learned to let Gun Runner just be Gun Runner and the success has come to him,” winning trainer Steve Asmussen said. “I’m very thankful to Winchell Thoroughbreds and Three Chimneys for the opportunity to race this horse again this year. With his pedigree and his Grade 1 win last year, it’s very sporting of them to give us another year.”