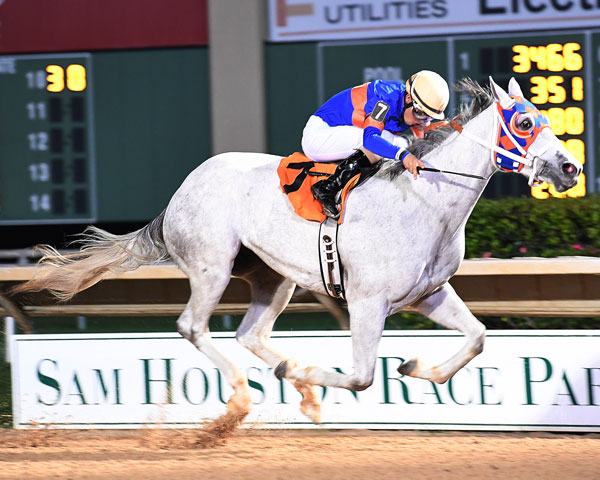 Rumpole pulled a minor upset in the $65,000 Jim’s Orbit division and Archer City was much the best in the $65,000 Two Altazano division. The Texas Thoroughbred Association (TTA) renamed the series for offspring of eligible Texas stallions to honor the late Clarence Scharbaurer Jr. who passed away in 2014.

This was just the fourth career start for the son of Too Much Bling, who is trained by Robert Young. He broke his maiden at first asking on October 22 at Retama Park and moved directly into stakes action, finishing fifth in the Texas Stallion Stakes before shipping to Houston. Despite being bumped twice in open company in the $50,000 Space City Stakes here on January 29, he ran fourth. That race set him up nicely for his gate-to-wire score this evening under David Cabrera.

“We did not have a perfect trip that day, but he ran a really good race,” said Cabrera. “I was feeling pretty positive for this. I want to thank Bob Young for giving me this chance. He is a really classy and nice horse; the kind everyone wants to ride.”

Young was pleased with the performance of Rumpole, who completed six furlongs in 1:10.75 over a fast main track.

“He ran a good race tonight,” said Young. “We’ve been waiting for this; we thought he was a good colt for a long time and he finally proved it.”

Running second was Contrarytoordinary, a Valid Expectations colt co-owned by Danny Pish and Denis Foster and trained by Pish. He just one week ago, but Pish, who also trains the colt, felt he had plenty left in the tank. And that he did, with Ted Gondron in the irons, dueling with Rumpole in the early stages of the race, and holding for second. Imma Wild Bling under Danny Sorenson ran third, followed by Checker Czech, Shaded, Comanche Hopper, Too Much Gone, My Expectations, morning line favorite Raising Rumors and Witt Stamp.

Sent off as the third choice at 4-1, Rumpole returned $10.00 for the win and earned $39,000 for the victory. Young said that Rumpole would likely be pointed to the $50,000 Groovy Stakes on March 13. Rumpole’s sire Too Much Bling stands at Valor Farm.

Owned and bred by Douglas Scharbauer, Archer City made four starts at Remington Park, winning a maiden special weight on November 10. She was making her stakes debut off an impressive allowance score here on January 28 in which she drew clear by nine lengths. Jockey DeShawn Parker had the return call, patiently sitting off the early pace set by Too Much To Bear. When he saw an opening at the top of the stretch, he guided his filly on the rail and rallied to the wire in a final time of 1:10.47

“She did everything perfectly the last time I rode her,” said Parker. “They said she was a little bit quirky in the gate, but today she sat really well and when I saw a little hole she burst through. This is the type of filly that if anything comes to her, she just takes off.”

Archer City won by three lengths, which did not surprise her trainer.

“She ran very professionally,” said Calhoun, who was reached by phone following the race. “They tried to squeeze her, and she was in tight quarters, but DeShawn gave her a great ride and did what he needed to do.”

Wayne Sanders and Larry Hirsch own Kat’s Infatuation, who won her last two races at Delta Downs and closed gamely to complete the exacta.

“Kat’s Infatuation has changed her running style from pure speed,” added Calhoun. “She has gotten to where she can sit off the pace and pounce. It was a good effort tonight.”

Archer City, whose sire Silver City formerly stood at Valor Farm, paid $3.80 as heavy favorite. She earned $39,000 for the Two Altazano win, improving her career record to three wins from six starts. To Much To Bear, ridden by Richard Eramia held for third, followed by Mighty Ferrari, Country Candy, Gold Shock, the third of the Calhoun entrants and Pure Grey.

Calhoun anticipates that Archer City will return closing weekend for the $50,000 Bara Lass, one of the five Texas Champions Day stakes that were rescheduled from opening weekend.

In 2005, the Texas Thoroughbred Association renamed each of the Texas Stallion Stakes races to honor a famous Texas Thoroughbred. The colts and gelding division at Sam Houston Race Park has been named for Jim’s Orbit, who won the Grade 2 Ohio Derby and started in the 1988 Kentucky Derby. The fillies division is a tribute to Two Altazano, winner of the Grade 1 Coaching Club American Oaks in 1994. The accomplished mare, owned by the late Harold V. Goodman, was inducted into the Texas Horse Racing Hall of Fame in 2003.