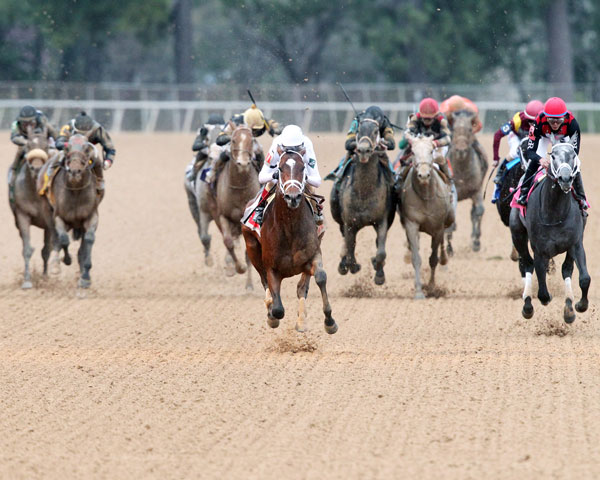 South Florida invader One Liner proved two turns were not a problem with an impressive 3 ½ length victory in Monday’s $500,000 Southwest Stakes (G3) before an on track crowd of 23,500 at Oaklawn. In the process, he earned his first 10 points towards eligibility in the Kentucky Derby and remained a perfect three for three in his career.

One Liner, with Hall of Fame jockey John Velazquez in the irons, was forwardly placed early and followed in fourth as even money favorite Uncontested set early fractions of the :22 4/5 and :46 2/5 for the half mile. Petrov, who had been tracking in second, took over as the horses turned into the stretch and opened up a lengths advantage over the field before being collared by the winner inside the furlong marker. One Liner drew off to win the 1 1/16-mile race in 1:41 4/5 over a fast track.

Petrov finished 8 ¼ lengths in front of third-place finisher Lookin at Lee, who had bobbled at the start and had to weave his way through traffic from 10th place. Silver Dust, Dilettante, Uncontested, Hence, P C Cowboy, Rowdy the Warrior, Chief Know it All, Warrior’s Club and Cu Rahy completed the order of finish. Cool Arrow scratched.

“I’m very pleased with his race,” trainer Todd Pletcher said via phone from South Florida. “He handled things very professionally. He shipped and settled in well. It looked like he finished strong and may have left something in reserve, which is encouraging.”