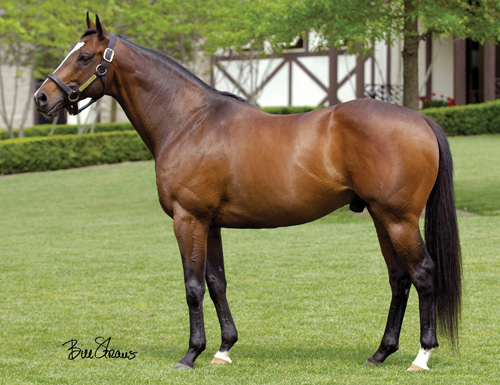 Pollard’s Vision, sire of Champion Blind Luck, has been sold to stand at Mighty Acres, Pryor, Oklahoma, in a deal brokered by Schumer Bloodstock and The Stallion Company.

A fee will be announced at a later date for the son of Carson City, who becomes the only stallion based in Oklahoma to have sired an Eclipse Award winner.

A tough and consistent performer, Pollard’s Vision broke his maiden as a two-year-old at Saratoga. At three, he won or placed in seven Graded stakes, notably when successful in the Illinois Derby (G2), Leonard Richards Stakes (G3) and Lone Star Derby (G3). He returned at four to win the National Jockey Club Handicap (G3) and run placed in the Pimlico Special Handicap (G1) and Suburban Handicap (G1).

Pollard’s Vision is also the sire of the Grade 1-placed Twentytwentyvision as well as 16 other stakes winners, including high-money earners Il Villano, the winner of $573,870, and Mister Pollard, the winner of $466,475.

So far this year, his progeny have earned a total of $2,658,636, more than any other sire currently based in Oklahoma.

A son of Carson City, Pollard’s Vision is out of the Dixieland Band mare Etats Unis, a sister to Grade 2 winner Bowman’s Band.

Pollard’s Vision will stand alongside Kipling, Save Big Money and The Visualiser at Mighty Acres, a division of Center Hills. Mighty Acres also announced another new stallion for 2016 with Unbridled’s Note.