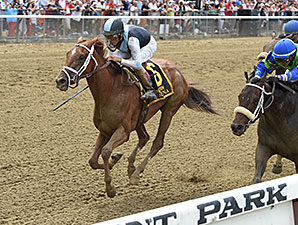 Curalina, owned by Eclipse Thoroughbred Partners, has been named the 2015 Aiken Trained Horse of the Year.

Curalina is a 3-year old chestnut filly by Curlin out of Whatdreamsrmadeof by Graeme Hall. Curlin is also the sire of 2013 & 2014 Aiken Trained Horse of the Year, Palace Malice. She was bred by CASA Farms I LLC and foaled in Kentucky on May 5, 2012. She was broken and trained at the historic Aiken Training Track by Brad Stauffer.

This is only the third time since the creation of this award that a filly has been honored as the Aiken Trained Horse of the Year (Country Star in 2007 & It’s Tricky in 2011).

The ceremony will be held on Sunday, March 20, 2016 at 2 pm at the Aiken Thoroughbred Racing Hall of Fame. Memorabilia from Curalina’s 2015 racing season and her career will be on display. The public is invited to attend the ceremony. The Hall of Fame is located at 135 Dupree Place, Aiken, SC 29801 inside historic Hopelands Gardens.