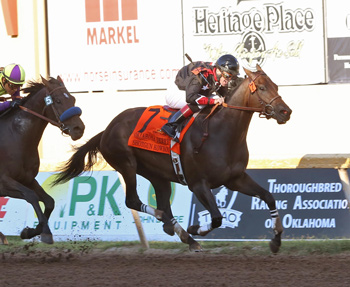 The final month of the 2015 Remington Park Thoroughbred Season will feature a new multi-race wager as a Pick 5 is incorporated into the menu. The Pick 5 will debut Friday, Nov. 13 and will begin with the first race on the program.

This will be the first venture with a Pick 5 at Remington Park. The racetrack has long offered rolling Pick 3s and for many years now, a Primetime Pick 4. Remington Park once offered Pick 6 wagering until waning interest in that bet no longer justified its regular inclusion in the schedule.

The new Pick 5, available for a minimum 50-cent wager, will be labeled the FiveTime and will cover races 1 thru 5 at the start of the Remington Park card. The debut edition of the FiveTime pick 5 will feature four claiming races (ranging in level from $7,500 to $15,000) and one Oklahoma-bred Maiden Special Weight event.

The FiveTime pick 5 will be offered at the start of every Remington Park race card for the remainder of the season after Friday night’s debut. The first race at Remington Park is 7pm nightly. Exceptions will be on Black Friday, Nov. 27 and Springboard Mile Sunday, Dec. 13 when racing starts at 1:30pm. All times are Central.

Bred, owned and trained by Trout, of Edmond, Okla., Shotgun Kowboy breezed five furlongs Tuesday morning in 1:00.76 over a fast main track at Remington Park. Cliff Berry, now the regular rider for Shotgun Kowboy, was up for the breeze.

Trout is planning one more workout, probably at a half-mile, before his first engagement outside of Oklahoma. All eight of Shotgun Kowboy’s career starts have taken place at Remington Park with six wins and more than $585,000 earned. In addition to his win in the Oklahoma Derby and the Oklahoma Classics Cup, Shotgun Kowboy was a two-time stakes winner at Remington Park as a 2-year-old, winning the Oklahoma Classics Juvenile and then the Clever Trevor Stakes. He was second to Bayerd, beaten just a head, in the richest race for juveniles locally, the $250,000 Springboard Mile.