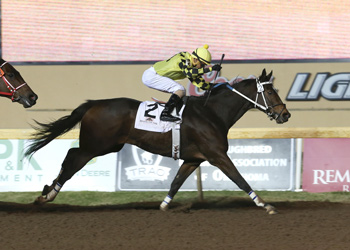 The $50,000 Silver Goblin Stakes featured a quality field of 11 Oklahoma-breds in the main event on Friday night at Remington Park. Johnny Whip won the race for the second consecutive season, with a rally along the rail, getting through to win by a length.

Owned by George Straw of Whiteboro, Texas and trained by Jody Pruitt, Johnny Whip was ridden by C.J. McMahon who had a ton of horse beneath him throughout the lone turn of the Silver Goblin Stakes. More than once, McMahon had to take hold of his mount as he moved up on the front-runners, to avoid making contact. Once off the turn, McMahon found a lane to let Johnny Whip find his best stride.

“He broke good and sat on the rail really well for me. When I turned for home, I saw an opening and I shot for it and he responded. I thought (Okie Ride) would kick home a little more than he did but Johnny Whip had a lot left in him.”

Okie Ride battled for the lead from the outset with Chifforobe and then Imahit over the final half of the race. Johnny Whip waited to move until the stretch, crossing the finish in 1:16.86 over the fast track.

The distance seems to be key for Johnny Whip as he has only finished out of the top three once in eight career starts at the measure, now boasting four wins including the last two Silver Goblin Stakes.

Johnny Whip is a 6-year-old gelding by Stephen Got Even from the Seeking The Gold mare Paradisa and was bred in Oklahoma by Robert Zoellner of Tulsa. The Silver Goblin Stakes was the 14th career win for Johnny Whip from 48 career attempts. He made $30,000 for the effort to run his overall bankroll to $400,870.

The Silver Goblin Stakes is named after the speedy gray millionaire, and Oklahoma foal, who was a dominant runner throughout the mid and late 1990s. He started his stellar career at Remington Park.

McMahon won four races on Friday. In addition to Johnny Whip, he won with Fire Mission ($5 to win) in the fifth race, Jock’s Room ($2.80) in race six and Chablis ($12.60) in race nine. The riding quadruple gives McMahon 76 wins for the season and an eight-win lead over Ramon Vazquez in the jockey standings. McMahon, in his first full season at Remington Park, is attempting to dethrone Vazquez who has won the title the past two seasons.

Jockey Jareth Loveberry won the first three races on Friday night. His triple began with Yes I’m Native ($42.60) in race one, continued with Harlan’s Hope ($24.20) in race two, then concluded with Strut N Swagger in race three. Loveberry now has 47 wins for the season and is third in the standings.

For his career, Loveberry now has 995 victories, sitting just five shy of his milestone 1,000th win.