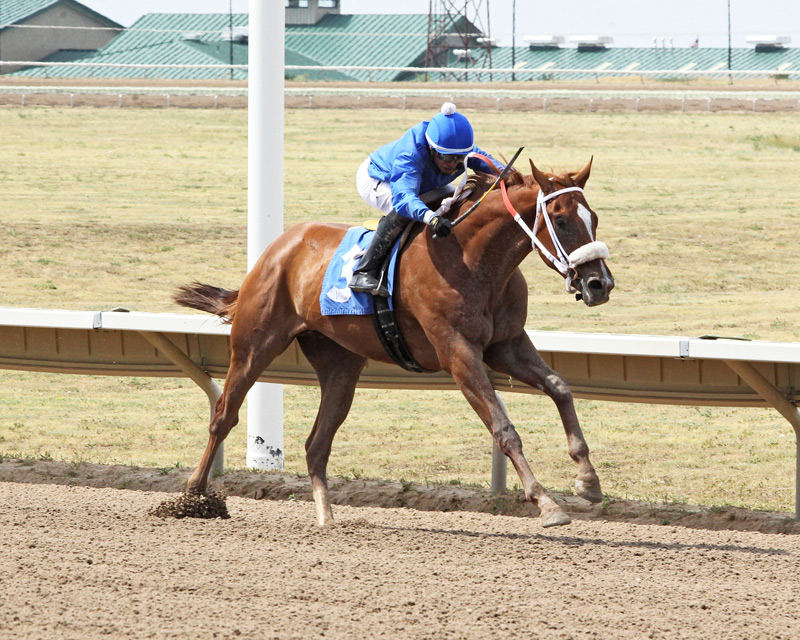 A pair of 2-year-old chestnut geldings trained by Kenneth “Butch” Gleason are the leading local contenders in Sunday’s Gold Rush Futurity at Arapahoe Park, the richest horse race in Colorado that has been won for the past two years by shippers from Texas. The $100,000 stakes race over six furlongs will highlight the Aurora, Colorado track’s final weekend of the 2017 season that features three stakes races on Saturday and three on Sunday.

The 2015 Gold Rush went to Texas Chrome, who has gone on to become just the second Texas-bred ever to earn more than $1 million and only the second horse that has raced in Colorado to compete in the Breeders’ Cup following 2011 Gold Rush winner Chips All In. Another Texas-bred, Bling On the Music, won the 2016 Gold Rush, becoming the first filly in Arapahoe Park history to defeat male horses in the track’s most prestigious race and by the biggest margin, 13 lengths, in the race’s history.

In 2017, Da Grump enters the Gold Rush on a two-race win streak that includes a 4 1/2-length victory in the Silver Cup Futurity on July 29 under jockey Jake Barton. Da Grump represents the same connections, trainer Gleason and owner Annette Bishop, as the last Colorado-bred Gold Rush winner, Get Happy Mister five years ago.

“He gets a little better every race,” Gleason said about Da Grump. “He’s a slow-developing colt. He’s a little bitty thing. He’ll be carry the same silks as ‘Mister,’ so maybe.”

Da Grump’s lone defeat came in his maiden debut on June 17 to A J Samurai, a stablemate in the Gleason barn who went on to capture the Colorado Thoroughbred Breeders Association Futurity on July 9. A J Samurai, who is owned by breeder Robert Schreiber, won the top Colorado-bred futurity by 3 3/4 lengths under jockey Karlo Lopez despite a troubled start to the race.

“He’s got a lot of guts and is a trier,” Gleason said about A J Samurai. “He took a lot of beating down the backside. It didn’t bother him, and when a hole came open, he shot through like a bullet.”

The 2017 Gold Rush will be run as the 10th and final race on Sunday’s closing day card with a field of 12. The out-of-state horses include Thermistor, a maiden winner at Lone Star Park in Texas, and Fortified Effort, a maiden winner at Prairie Meadows in Iowa.

In the weekend’s other stakes races that will put an exclamation point on the 2017 Colorado racing season, Co Ferment will try to defend his title in the 1 1/8-mile, $30,000 Arapahoe Park Classic on Saturday. From the barn of leading Arapahoe Park Thoroughbred trainer Stetson Rushton, the 5-year-old bay horse won the six-furlong, $30,000 Front Range Stakes on July 2 in just his second sprint race in 19 career starts.

For Quarter Horses, Iza Captain goes for his third stakes win of the season in Saturday’s Arapahoe Park Quarter Horse Derby for 3-year-olds over 400 yards. The sorrel gelding to be ridden by Jose Ruiz was winless in eight starts as a 2-year-old before capturing the Dolls Prodigy Stakes on June 4 and Lucille Rowe Derby on July 15 as a 3-year-old in 2017.

Indomable Cartel and jockey Fernando Fonseca-Soto will try to dominate Sunday’s Arapahoe Park Quarter Horse Futurity for 2-year-olds over 400 yards like they did in the $75,000 Cherry Creek Futurity, Colorado’s richest Quarter Horse race, on July 15.