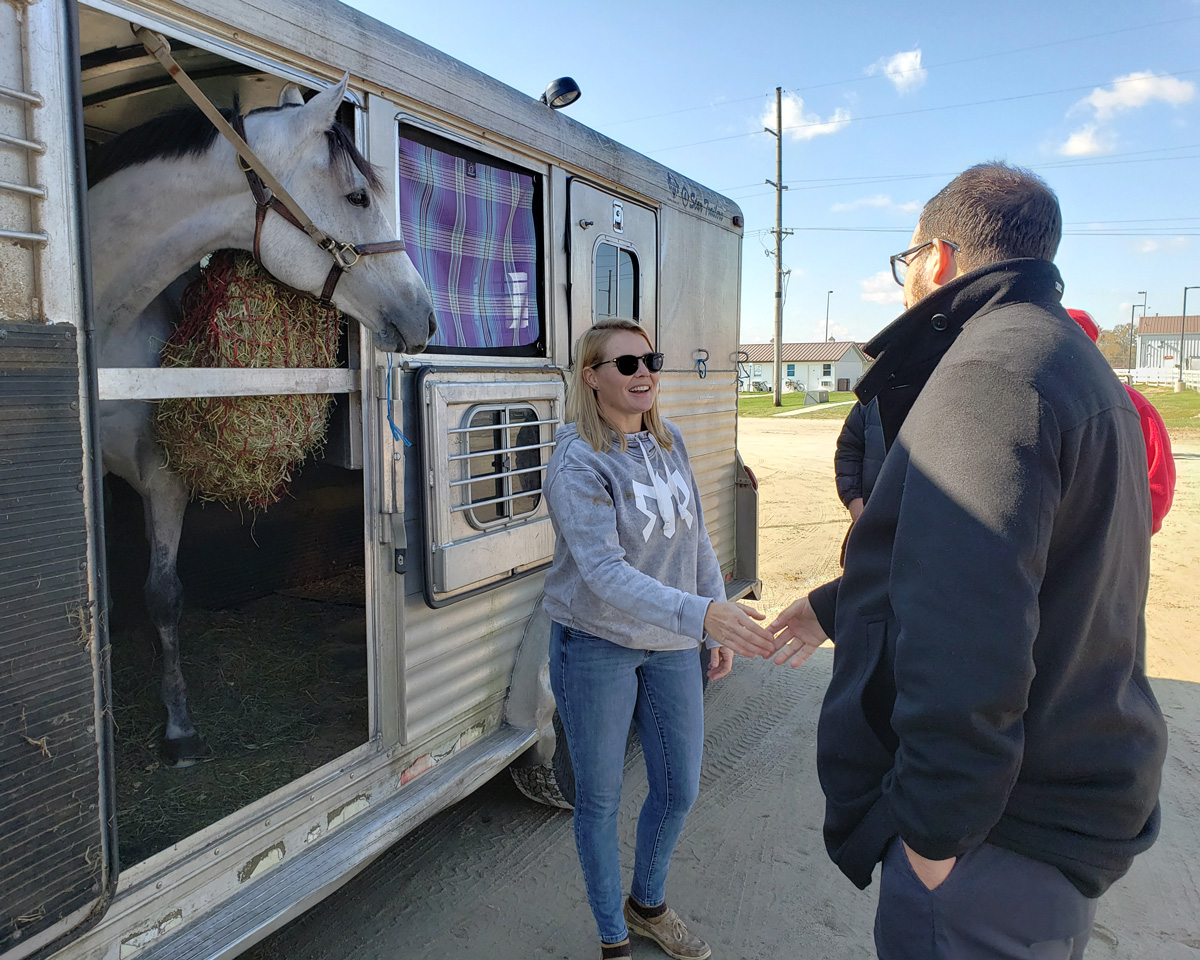 The end of the racing season at Indiana Grand Racing & Casino sees trainers moving tack to the next track and horses either head to the farm for vacation or to the next race meet. It is also seen as the informal retirement period for racehorses.

For trainer Tim Glyshaw and his client, Ironhorse Racing Stable LLC, it was time to consider a new career for Indiana-bred Havenhill, a 3-year-old gelding by Run Away and Hide and out of the Dixie Union mare, Holladay Dixie.

“It’s not that he’s a failure at racing–he’s had success on the track,” says Harlan Malter, principal for Ironhorse Racing Stable LLC. “You can just tell Havenhill is meant for life off the track. Our mission was to retire him sound and happy, and we have.”

Havenhill was bred in partnership by Superbad Stables LLC and Pine Lake Breeders LLC, the breeding arm of Ironhorse Racing. In 18 starts, the gelding has a record of two wins and eight other times hitting the board, earning $60,070 in his career, all at Indiana Grand. “He’d race to the front, but then was far more interested in waiting for his ‘friends’ to catch up, then go on for the win,” says Malter. “You can just tell that Havenhill is meant for life off the track. Our mission was to retire him sound and happy, and we have.”

It didn’t take long for word to get out that the handsome gray gelding was for sale to a non-racing home to get to the right person. Megan Corbett, an event rider and trainer based in Upton, Kentucky, specializes in buying and retraining off-track Thoroughbreds. After winning a fun side bet with her husband, Hub, Corbett set out looking for her newest project, and it wasn’t long until she heard about Havenhill. His kind eye and famous black forelock caught her eye.

“He was just adorable in the first pictures I saw,” says Corbett.

Corbett made the three hour trip to the Shelbyville, Indiana, track to meet Havenhill and his connections in person. After inspection and getting to know the gelding more, the deal was made. Glyshaw scratched the gelding out of his last race of the year so he could officially retire for his new career. Ironically, Havenhill’s new home is Hillside Haven Farm.

“Havenhill has his own fan club, from our owners to people who just love his goofy attitude,” says Harlan. “While it’ll be sad to not be able to continue following him on the track, our goal with our breeding isn’t just to run them, but to see them be happy in their careers, and I think Megan will do great with him.”

After just a few days off the track, Havenhill was given a new barn name of “Harlan” and has already started on his new journey as a sport horse. The video of his first jump chute (https://www.facebook.com/megan.vorbaucorbett/videos/2814354001932264/) caught the eye of the Land Rover Kentucky Three Day Event, amongst others, with thousands of views on social media. Corbett says she’d love to aim him for the Retired Racehorse Project’s Thoroughbred Makeover in 2020, but she doesn’t want to push the young gelding too much.

“He has so much potential. He’s a very smart dude who loves a challenge,” she says. “I think he will love the complexity and variety of being an event horse, yet he has impeccable ground manners. It’s obvious his trainer taught him to be a consummate professional. And I love that he comes with his own fan club.”