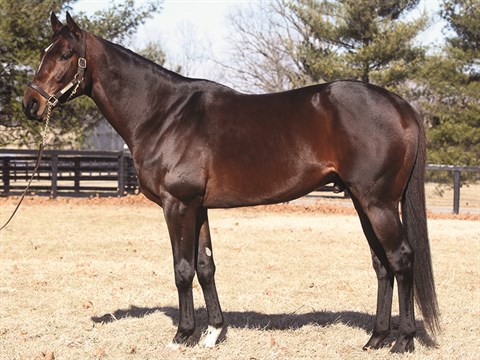 Eureka Thoroughbred Farm in Fredericksburg, Texas, has announced the addition of Keep Up for the 2020 breeding season. The multiple stakes-winning son of Unbridled’s Song will stand for a $2,000 fee with substantial discounts for mares that are foaling in Texas. Keep Up will stand as property of Mike Grossman, who also owns Eureka and stands stallions Mr. Besilu, Expect a Lot and The Hunk at the farm.

Sired by Unbridled’s Song, whose sons at stud include Arrogate and Liam’s Map, Keep Up won seven of his 18 career starts with two stakes victories, including the Grade 3 River City Handicap on the Churchill Downs turf course. An earner of $300,545, Keep Up had a total of five wins on the grass, along with a maiden-breaking win at Gulfstream Park on the dirt and an allowance victory on the synthetic surface at Arlington Park. As good as his racing career was, it likely could have been even better if not for a knee fracture he sustained in the field as a yearling. Keep Up was confined to a stall for more than six months during his recovery and was not expected to ever make the races. He eventually did and debuted late in his 3-year-old year and then blossomed with his stakes wins coming at ages 5 and 6.

“With the increased purses and breeding incentives in Texas thanks to new legislation, we’ve already seen increased interest in advance of the coming breeding season,” said Grossman. “We think Keep Up is a strong addition to our stallion roster and gives breeders in the region an option for a classic pedigree with a strong focus on stamina.”

For more information, go to eurekathoroughbreds.com.