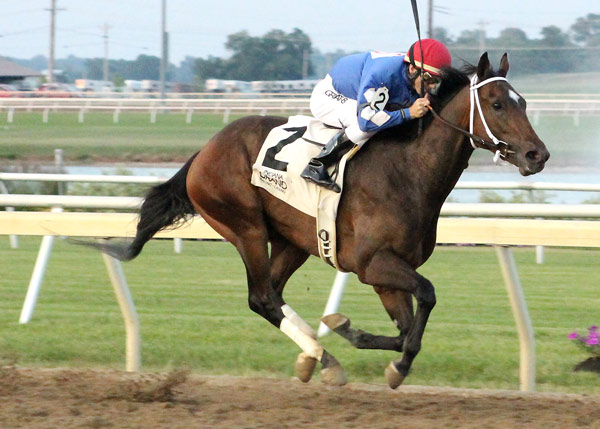 Easy Doer and Jockey Rodney Prescott made their journey look like an easy one in the third running of the $75,000 ITOBA Stallion Season Jim Elliott Memorial Saturday, June 11 at Indiana Grand Racing & Casino. The duo covered the one mile race in a time of 1:38.11 to win by seven and three-quarter lengths, establishing a new stakes record for the stakes.

Starting from post two, Prescott rallied quickly out of the gate to secure the top spot along the rail and was joined by Dave and Eddie Perez through fractions of :23.04 and :46.03 before Dave lost momentum and began to drop back. Justice Yall and Fernando De La Cruz began to move up along the inside and saved ground around the final turn, but never could catch Easy Doer.

In the stretch, Prescott asked a little more from Easy Doer and he responded opening up by six lengths and continued to increase his lead at the wire. Justice for Themob and Cheyanna Patrick rallied home for second over Givemeyourbestshot and Alex Contreras, who also saved ground along the inside to finish third.

“We had a lot of pressure early and the fractions went a little fast, but he (Easy Doer) had his ears pricked forward and was moving easy,” said Prescott. “I asked him again at the top of the stretch and he dug back in. This was his first time going long tonight and he ran a nice race.”

“I had a half brother to this horse (Easy Doer) and he won going a mile his first try, and the Alluvial horses are known for running long,” said Sturgeon, who is based at the Thoroughbred Training Center in Lexington, Ky. “We thought he had a pretty good chance and the track was favoring speed, so the trip worked out perfect for him. We will see how he comes out of this race before we decide when he races next. This hot weather sometimes takes a horse longer to bounce back. We will let him tell us when he’s ready to run next.”

The previous stakes record for the ITOBA Stallion Season Jim Elliott Memorial was established by Daddy Justice and Jockey Albin Jimenez in 2015. The previous mark was 1:38.48 for the Gary  Patrick-trained horse.

The Jim Elliott Memorial is named after a man that dedicated a lot of his time and talents to the advancement of the Thoroughbred industry in the state of Indiana. His wife, Amy, was on hand to make the trophy and blanket presentation to the winning connections of Easy Doer.

“He (Jim) loved horses and he loved racing,” said Amy Elliott. “He really would be proud to know how the industry has progressed.”

The stakes race, along with the $75,000 ITOBA Stallion Season Linda Swingley Stakes, was part of a big weekend for the organization. They also prepared a sale of horses of all ages on the backstretch Sunday, June 12. Horses from the sale breezed on the track earlier in the day Saturday.

The Indiana Thoroughbred breeding program has grown leaps and bounds over the past few years. According to the Indiana Thoroughbred Breed Development, more than $15.6 million was distributed by owners, breeders and stallion owners participating in the Thoroughbred Breed Development program in 2015. There were 75 Indiana bred horses that won over $50,000 last season and of that number, 21 of those horses won in excess of $100,000. The figures mentioned above does not include award payments to breeders and stallion owners, which adds an additional $3.2 million in 2015 paid out in the state of Indiana.