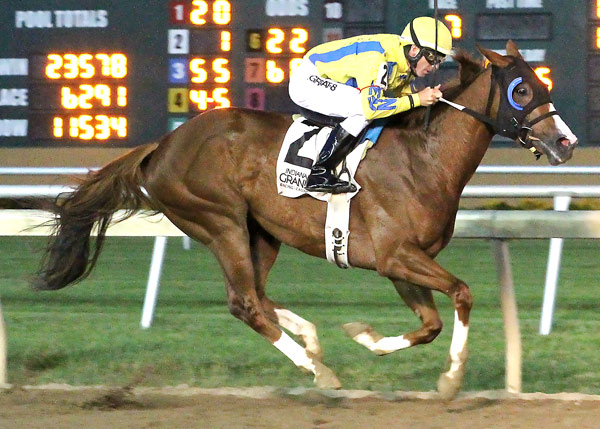 Carmalley Chrome and Jockey Rodney Prescott dazzled a field of seven three-year-old Indiana bred fillies Saturday, June 11 in the third running of the ITOBA Stallion Season Fillies Linda Swingley Memorial at Indiana Grand. The duo rallied to a three-length win in a time of 1:38.27, a new stakes record.

Starting from post two, Carmalley Chrome broke alertly and was on the lead before the field hit the first turn in the one mile race. Peyton’s Pass and Fernando De La Cruz found a favorable spot on the outside and sat off of Carmalley Chrome until the field straightened up down the backside. De La Cruz inched his filly up onto Carmalley Chrome’s flank and applied pressure, but sat patiently without overextending to ensure enough energy for a stretch drive.

Around the final turn, Carmalley Chrome and Peyton’s Pass drew away from the rest of the field, and as Track Announcer Bill Downes stated, began a “showdown” for the stretch drive. The two matched each other stride for stride for a while but Carmalley Chrome eventually had the upper hand, pulling away for the win over Peyton’s Pass. Chica Cherry Cola and Malcolm Franklin bested the rest of the field for third.

“She (Carmalley Chrome) had a really good trip tonight and broke really well,” said Prescott, who earned his second stakes win of the night. “Turning for home, she re-broke and she was back on the front easy and pulled away from them. She has a lot of speed and ran perfect tonight.”

Carmalley Chrome paid $4.20, $2.20, $2.10 across the board as the second favorite of the field. The Cat Dreams filly earned her third win in four starts for 2016 for owner Tom Roche, who bred the filly at his Carmalley Valley Farm.

“In her last start, she (Carmalley Chrome) got squeezed back and it took her out of her element, but she still ran a good race,” said Roche, who has invested heavily in the Indiana breeding program. “She had a good trip tonight and she really showed her stuff. We are really proud of the way she raced. I have a lot of Indiana breds running up here quite a bit, and we are glad to be part of the Indiana breeding program.”

Carmalley Chrome increased her bankroll to nearly $100,000 with her win in the Swingley Memorial. She is trained by Mike Nance, who has a stable based at Indiana Grand.

“She (Carmalley Chrome) is a pleasure to train,” said Nance. “She doesn’t have any bad habits and is the type you just hang a bridle on and let her do her thing. She loves her job and love to go fast, which is a good thing for any trainer. Rodney (Prescott) did a great job riding tonight. We thought the four (Peyton’s Pass) would come at us. We wanted the lead but he was able to sit and have enough left for the finish.”

This is the first year the ITOBA Stallion Seasons Fillies has been tagged the Linda Swingley Memorial. The race was named in honor of longtime ITOBA Board Member Duane Swingley’s wife, who was a strong advocate for Thoroughbred racing in the state of Indiana. Duane was joined by numerous friends and family for the presentation of the trophy and blanket to Roche and the rest of the connections of Carmalley Chrome.

The previous stakes record for the ITOBA Stallion Season Fillies was set in 2014 by Lena Love and Albin Jimenez in a time of 1:38.71.