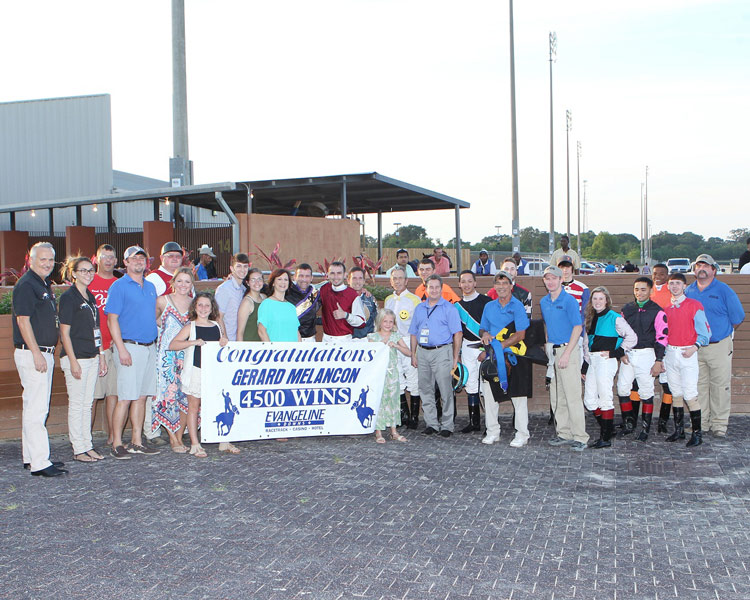 Jockey Gerard Melancon became the 44th rider to reach 4,500 wins in his career on Thursday night at Evangeline Downs with a victory in the fourth race aboard Bad Behavior. Melancon had the gelding in contention right from the start of the race and, in fact, had a speed duel with his son, Jansen, who was riding Sonofaguska. The twosome covered the quarter-mile in 22.73 seconds and the half-mile in 45.87 seconds. After putting away Sonofaguska, Bad Behavior withstood a challenge from Jax Be Quick to draw off and win by 2 ½-lengths in a final time of 1:25.04 for seven furlongs.

Bad Behavior was bred in Kentucky by Hal Earnhardt. The 6-year-old gelding is owned by Robert Asaro Enterprises Inc. and trained by Ron Faucheux. He is by two-time Breeders’ Cup Sprint winner Midnight Lute, out of the Pioneering mare, Behaving Badly.

Melancon began his career in 1984 at Delta Downs in Vinton, Louisiana. He recorded his first victory at that racetrack aboard Dash And Cash for trainer Manuel Robin, who Melancon credits for giving him his start in the Thoroughbred business. Melancon’s mounts have made over $76,000,000 in career earnings from his more than 29,000 starts.

Melancon considers his victory in the 2004 Grade 2 $500,000 Super Derby to be among his most memorable trips to the winner’s circle. He had always dreamt of winning that race since his idol, Laffit Pincay, Jr., was able to win it aboard Sunny’s Halo in 1983.

Melancon is also one of just two jockeys to win the Grade 3 $1,000,000 Delta Jackpot on two different occasions. Melancon won the Jackpot in 2011 on Sabercat and in 2013 on Rise Up.