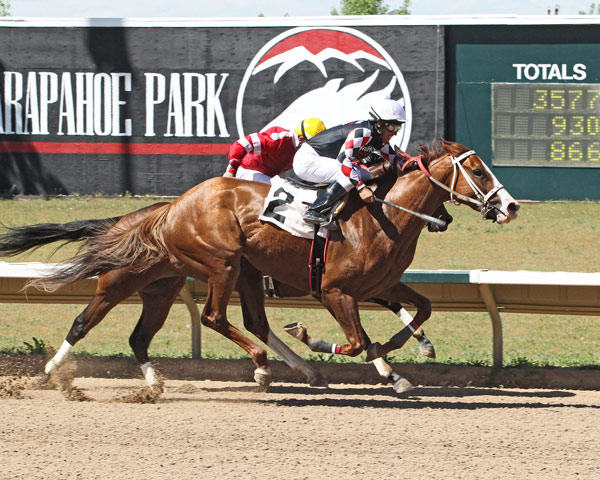 “I definitely have some big shoes to fill with my grandpa, and it was pretty exciting,” Stetson Rushton said. “Ever since I was a baby, I’ve been at Arapahoe every summer…Probably the last four or five years, being able to take over and do most of the work around the barn, that’s when I really fell in love with it and knew that this was my calling.”

Rushton said he has 74 horses in training at Arapahoe Park and saddled 12 horses on a busy Sunday. After Sunday, Rushton had 22 career wins from 200 starters.  He is currently the leading Thoroughbred trainer at Arapahoe Park with 10 wins from 91 starters. Continuing the family tradition, Rushton’s assistant trainer is his sister, Sheridan.

“Especially for my first year into it, it’s a lot, but I’ve been getting by alright,” he said.

Added father Shannon Rushton: “I’m proud of them. They work well together and put in a lot of work. It’s a real team effort.”

Temple Rushton finished his career in December 2015 with 555 wins from 5,460 starters in a career that began in 1983. He was Arapahoe Park’s leading Thoroughbred trainer in 2015 with 25 wins from 185 starters before handing over the reins to his grandson.

In Sunday’s six-furlong, $35,000 Molly Brown Stakes for fillies and mares, Brokeanlovingit and jockey David Cardoso ran down stablemate Extreme Caution and Mobiledixie to win by a neck in 1:10.13 as the 6-5 favorite in the field of six. The victory was also the first stakes success for owner David Lebsock.

“I knew Extreme Caution was the quickest, and she was kind of my rabbit to go out and chase the speed,” Stetson Rushton said. “She did her job, and Brokeanlovingit did hers, too, by running them down.  That’s kind of how I wanted it to set up, and it just worked out that way.”

Ries’s first career victory came 25 minutes later in Sunday’s eighth race at Arapahoe Park, a six-furlong allowance contest for fillies and mares with a full field of 12.  Ridden by Russell Vicchrilli, Kelsey pulled off a 29-1 upset.  Ries’s first victory was with her 10th starter.