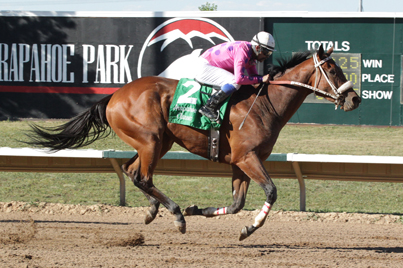 Get Happy Mister cemented his legacy as the best horse ever bred in Colorado with a 2 3/4-length victory against a talented group of shippers in the $100,000 Arapahoe Park Classic on Saturday at the track near Denver. He completed an undefeated 2014 season at Arapahoe Park with five victories, four of them in stakes and ranging in distances from 5 1/2 furlongs to 1 1/8 miles. The 4-year-old bay gelding owned by Annette Bishop, trained by Kenneth “Butch” Gleason, and ridden by Mike Ziegler has never lost in nine races at the Aurora, Colorado track. However none of his victories was more impressive than in Saturday’s 1 1/8-mile stakes.

“He’s a superstar,” Ziegler said. “When you can go 1 1/8 miles and take command like he did, that’s the sign of a real racehorse.”

Ziegler took Get Happy Mister five lengths behind an early speed duel between Ground Transport, the 4-5 favorite and a winner of $100,000 stakes races in New York and Maryland, and longshot Cockeyed Cowboy.

“He was a little rank early,” Ziegler said. “I saw the speed go. He fought a little bit. When he got halfway around the first turn, he leveled out. I just watched them until the 3/8ths-pole. Then Mister just took me. He knows what he’s doing. Down the lane he was kind of pricking his ears.”

Get Happy Mister completed the 1 1/8 miles in 1:51.22 as the 9-5 second favorite in the field of eight. Bishop said her stable star sired by First Samurai out of dam Sara Margaret has now earned a well-deserved rest. Get Happy Mister, a son of First Samurai bred by Willard Burbach, now has an overall record of 10 wins from 13 starts with earnings of $324,928. While most of his success has come at Arapahoe, the Colorado-bred proved he can run and win against open company when he took the $100,000 Northern Spur Stakes at Oaklawn Park last year.

“This race tested him to see if we know how far he can run and what he can do,” Bishop said. “It seems like any distance can work for him. He’s the best horse I’ve ever had.”

Magical Twist, who is trained by Sharlot Martinez and ridden by Dennis Collins, ran on for second as a 23-1 longshot. Leadem in Ken, who shipped to Colorado for trainer Mike Maker and jockey Azael De Leon, was a further 1 1/4 lengths behind in third. With Wally Van finishing fourth, the three Colorado-breds in the field defended home turf by finishing first, second, and fourth. Willard Burbach bred both Get Happy Mister and Wally Van, and Linda Wood of the Menoken Farms bred Magical Twist.

“It went back to home cooking,” Get Happy Mister’s trainer, Gleason, said.