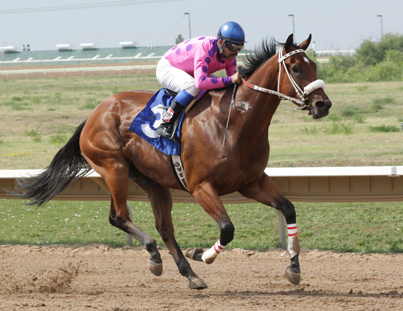 Get Happy Mister will try to put an exclamation point on one of the best seasons Arapahoe Park has ever seen by going undefeated in five races and winning his fourth stakes of the meet in Saturday’s $100,000 Arapahoe Park Classic. However, the Colorado-bred superstar, who has never lost in eight races in his home state, will have his toughest test to date at the Aurora, Colorado racetrack. A strong group of shippers, including stakes winners Ground Transport, Leadem in Ken, and Called to Serve, will also be part of a field of 10 for the 1 1/8-mile stakes race for 3-year-olds and up. For the first time ever, HRTV, The Network for Horse Sports, will provide live television coverage of horse racing in Colorado.

Get Happy Mister has easily won all four of his races at Arapahoe Park this season—an allowance on May 26, the Aspen on June 14, the Front Range on June 29, and the Mount Elbert on July 27—by a combined 16 1/2 lengths.

“He’s got more in the tank than I’ve used,” jockey Michael Ziegler said after the 4-year-old First Samurai gelding bred by Willard Burbach and owned by Annette Bishop cruised to a 5 1/2-length victory in the Mount Elbert. “They usually ship in for the bigger purses, and if they do, we’ll be ready.”

The out-of-state contingent includes Ground Transport, who will be racing in his fifth different state this year. The 4-year-old front-running colt to be ridden by David Mello for owners West Point Thoroughbreds won the $100,000 Harrison E. Johnson Memorial at Laurel in Maryland in March and the $100,000 Drosselmeyer at Belmont in New York in May. He will be the first horse that trainer Mike Stidham has ever raced at Arapahoe.

“Our goal with this horse has been to ship around the country looking for spots that he fits in, and so far we’ve been pretty successful,” Stidham said. “He’s really handled everything we’ve thrown at him pretty well. He’s a good traveler, and hopefully he’ll do the same there.”

Leadem in Ken will be reunited with jockey Azael De Leon, who rode the 4-year-old colt owned by Ken and Sarah Ramsey and trained by Mike Maker to a nine-length romp in the $75,000 Gus Fonner Stakes at Fonner Park in Nebraska in April. Called to Serve, a 5-year-old gelding now in the barn of New Mexico-based Justin Evans and to be piloted by Irwin Rosendo, is a former graded stakes winner in the Grade 3, $150,000 Discovery at Aqueduct in New York in 2012.

The local runners also include 9-year-old Hezamazing, who won the Arapahoe Park Classic in 2010 and 2012.

Sky T, who will be ridden by Karlo Lopez, has won his two career races—the June 28 trial and July 13 finals for the CTBA Futurity at Arapahoe Park—by a combined 22 1/4 lengths. Richard Lueck, who owned Mr. Trieste, also races Sky T.

“I ran his daddy and made a lot of money with his daddy,” Cross said. “[Sky T] is the best offspring I’ve ever had of his. You never know how good they are until they run. I thought [Sky T] had it in him because I’ve worked him with older horses.”

The other Arapahoe Park stakes winners in the field are Red Carpet Runner and Ms. Battlefield. Red Carpet Runner dominated the Silver Cup Futurity Colt/Gelding Division on August 2 by 9 1/4 lengths for owner Annette Bishop, trainer Kenneth “Butch” Gleason, and jockey Travis Wales. Ms. Battlefield romped in the Silver Cup Futurity Filly Division on August 2 by 7 3/4 lengths for owner Sandra Kutz and trainer Kim Oliver. Michael Ziegler will ride. Like Ms. Battlefield, Stratagem, to be ridden by Russell Vicchrilli, is another filly taking on the boys. She broke her maiden at Arapahoe Park on June 28 and then won the Wyoming Downs Thoroughbred Futurity against male horses on July 20.

Shipping to Colorado for the Gold Rush will be Bessie’s Boy, who captured the $100,000 Tremont at Belmont in New York by six lengths on June 20. Abel Lezcano will in the irons for the Wesley Ward-trainee. Trainer Adam Kitchingman, who brought Chips All In from California to win the 2011 Gold Rush Futurity, will saddle Social Request, a maiden winner at Del Mar on August 7.  Dennis Collins takes the mount.

HRTV will also air the Gold Rush Futurity in addition to the Arapahoe Park Classic.