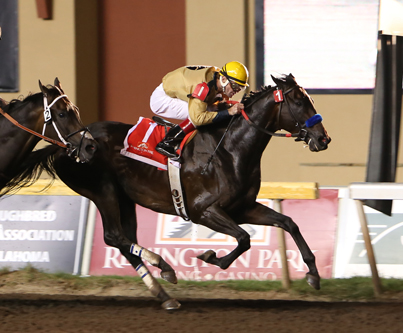 Jockey Cliff Berry picked up his 2,000th Thoroughbred victory at Remington Park during the Opening Night of the season on Friday. He scored his first stakes race of the season Saturday, riding a willing Code West to win the $176,050 Governor’s Cup.

Code West, had the inside post position and sat just off the pace set by Right To Vote who grabbed the lead a few strides after the start of the 1-1/8 miles race and was in control until deep stretch. “I was stuck on the inside,” Berry noted. “He was comfortable there and for some reason the horse on the lead (Right To Vote) stayed out and we had a dream trip. I thought he would squeeze back down on me (in the stretch) but he was worried about somebody else I think. My horse ran good and just gutted it out.”

Code West prevailed by a half-length, gaining the lead in the final yards while stopping the clock in 1:49.82 over the fast track. Right To Vote held second, 1-1/4 lengths better than For Greater Glory who gained third after trailing the field until the top of the stretch.

Owned by Bryan Hawk of Shawnee, Okla. and trained by Boyd Caster, Code West was purchased privately from Omaha, Neb. owners Gary and Mary West over the course of this summer. Code West was previously a regular competitor in graded stakes competition, counting the Grade 3 $100,000 Matt Winn Stakes at Churchill Downs in Louisville, Ky. as his top effort in 2013.

“We’ve bought a lot of horses from the Wests,” Caster noted. “They’re straight-shooters and you get what you pay for. We’ve done well with them back here.”

Code West won his fourth career race from 15 attempts in gaining the Governor’s Cup in his Remington Park debut. A 4-year-old by Lemon Drop Kid from the Saint Ballado mare Charitabledonation, Code West was bred in Virginia by Edward Evans. The first-place check from the Governor’s Cup of $105,000 increases the overall earnings for Code West to $414,176.

$75,825 David M. Vance Sprint
Ivan Fallunovalot is a horse with a funny name but with a serious game. The 4-year-old gelded son of Valid Expectations from the Horse Chestnut (SAF) mare Flashdance Missy moved his win streak to four consecutive races with a powerful finish in the six furlong event which served as the first stakes race of the Remington Park season.

Jockey Lindey Wade had a definite strategy aboard Ivan Fallunovalot. “I felt like there was a lot of speed in the race so I let them go. I loved our outside post and we benefitted from it. I always had the hope that we were going to get there once we got past the 6 horse (Sum Of The Parts). I thought he would fend off anybody that gave him a challenge.”

Ivan Fullunovalot went to the lead turning for home and then edged clear to win by three-quarters of a length. Sum Of The Parts set the pace handling a quarter-mile in :21.96 seconds and half-mile in :44.48 seconds before fading to a fourth-place effort.

Ghost Is Clear rallied for second while Okie Ride, the lone Oklahoma-bred in the Vance Sprint, came on to gain third, 1-3/4 lengths behind the winner.

Trainer W. T. “Tom” Howard claimed Ivan Fallunovalot for owner Lewis Matthews Jr. of Bismarck, Ark. at Oaklawn Park in Hot Springs, Ark. in March this year for $25,000. The gelding won the race in which he was claimed, and then his two subsequent optional claiming races.

Bred in Texas by Eileen Hartis, Ivan Fallunovalot now boasts a lifetime record of seven wins from 12 starts and his earnings of $45,000 for the Vance score, his debut effort at Remington Park, increased his lifetime earnings to $155,710.

The Vance Sprint is named in honor of the founding president and general manager of Remington Park who was on hand to present the trophy to the winning connections.